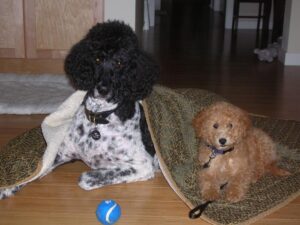 written by me. I always found it much easier to write as Rubin than putting the words in my own voice, so for years, I did my best to live inside his perspective or perhaps let his perspective live in me. While I’ve been able to look at photos of Rubin and all of his adventures lately, I haven’t been able to read many of the blog posts. I’ve tried, but when I do, they make me acutely aware of how I’ve lost Rubin’s voice in my head and that hurts almost as much as losing him.

Many of the blog posts are just brief explanations of our time with the dogs we walked — talking about the weather, the games of fetch, and the trails we explored. Some of them, though, are more introspective reflecting thoughts I’d have as we walked the miles and miles of each day. Each blog post came with photos, which accounts for the thousand upon thousands of photos I

have stored on very full backup drive. I could delete most them, and believe me, I’ve tried, but not only is it time consuming and overwhelming, it’s also emotionally hard. Especially now. Do I need 30,000 photos of Rubin? Probably not, but which ones do I get rid of?

Through the dog walking business and throughout his life, Rubin met and made some amazing dog friends. The photos reflect that as does the blog and it’s good for me to see it now because Rubin wasn’t always the friendliest dog. He was particular about who he liked and who he didn’t and when he didn’t, he was extremely clear about it. There was, for instance, a dog who lived in our neighborhood – a beautiful black shepherd – who Rubin wanted to kill. He’d smell that dog from three blocks away and turn into Cujo in a split second. To this day I have no idea what set him off, but for years, we did our best to steer clear. 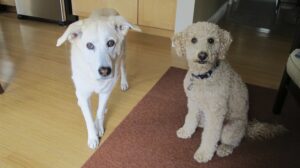 Still Rubin had many friends and tolerated many dogs who I would have thought were beyond annoying. I could spend hours listing each dog he met, after all I have a chronicle of it in his blog, but there were a few dogs who were extra special in his life. His first playmate was a Boston Terrier mix named Lucy. They played and rough housed and then crashed into a pile of exhaustion every time they met. While Lucy wasn’t around for much of Rubin’s life, she was instrumental in his puppy socialization.

His best friend and teacher was, of course, Monty. If you peruse the blog, you will see an 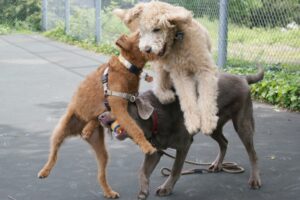 overwhelming majority of the posts and photos are of Monty and Rubin. They loved spending time together and Monty taught Rubin so much about being a dog, I don’t know what we would have done without him. When they first met, Rubin was about 10 weeks old. He so wanted to play with Monty, but Monty wasn’t that thrilled having a puppy jump all over him and tug at his ears. Still, he was extremely patient and not until Rubin hurled his little body one too many times at him, did Monty finally take action. He gave a loud growl followed by a quick bark, lifted his large poodle paw and placed it firmly but gently on Rubin’s side and pinned him to the floor.

Rubin submitted, as he should have and then kept his distance for quite some time. Once the situation was calmer, Monty laid down and we placed a blanket over him while he rested. Slowly, quietly, and with the utmost caution, Rubin tip-toed over and plopped himself down on the

blanket next to Monty. They say that dogs “hug” by mirroring each other’s body positions so two dogs lying back to back or side to side is considered a dog version of respect and love. That’s exactly what happened with their first meeting and from that day forward, their friendship deepened and lasted a good ten years before we had to say goodbye to beautiful and silly Monty.

Where Monty was a best friend, Lulu was an aunty. She lived in our neighborhood as well and every time she walked by, Rubin had to say hello. There was Woobie, who we met on a trail down to the lake and she thrilled Rubin to no end with games of chase in the woods or hours of 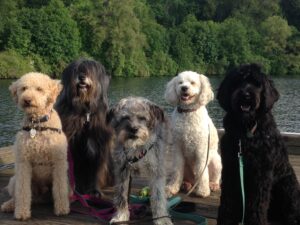 swimming in the lake. She was known as Nanny Woobie because she was so good natured, nothing phased her. Quillette was another neighbor dog, who taught Rubin to use his voice. Q was a talker, singing out her happiness every time we saw her. Rubin soon learned that a few “words” spoken at the right time could get him the attention he felt he deserved.

And there were countless others — Gemma, Saber, Ginger, Bella and Henri, Big Albert, Little Albert,  Zoe, Carter and Kali, Wilson, Greyson, Oshi and Perrito, Sesame, Rosie One and Rosie Two, Tyson, Charley, Roux, Uli, Finn, Tenzi, Gus, Roxanne,  and Theo. I’m sure I’m forgetting some and I feel awful for not remembering. I’m just thankful he had so many friends, so many good friends to boot, and that he connected me to so many

wonderful dogs and their people.

I’m hoping one day I’ll hear Rubin’s voice in my head again, be able to see the world as I once did from his perspective. One day I may have the courage (and time) to read through all the blog postings, familiarize myself again with what I perceived to be his life. And one day I hope to winnow out the most meaningful photos from the thousands I’ve collected, cherishing all the dogs we got to know and the times we spent together. But for now, I am learning to be gentle with myself and give myself time to heal and to grieve, to laugh and to remember, and to fully miss my special boy.