Rubin was an exuberant dog for most of his life. He loved to play fetch and chase, to go swimming and hiking and race around in the snow. Sometimes it was hard to keep up with him. He wasn’t the most cuddly dog, never stopped long enough to let us hold him or snuggle with him. That took time. Lots and lots of time.

Because of his exuberance, it also took time for him to warm up to new people and sometimes 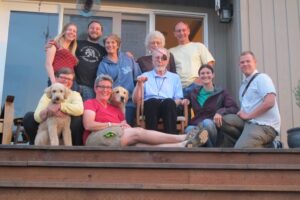 new experiences. This is when I realized he had a Rule of Five — he had to meet you five times or participate in the experience at least five times before he trusted it was all gonna be okay. If you reached to pet him at visit number three, he backed away. If you expected him to enjoy going to a new place on the second visit, he’d still be nervous and uncertain.

This happened when I started taking him to a new veterinarian, a woman who specialized in a more holistic approach to animal medicine. Cindy was incredibly patient with Rubin and soon learned that she couldn’t just whip out acupuncture needles and have Rubin relax. He hated acupuncture and even the sight or sound of Cindy reaching for a box of needles made him snarl. So we did acupressure and Cindy was the first person to suggest I expand my massage practice by earning a certification in acupressure.

Rubin loved acupressure and under Cindy’s guidance, we’d work together in the treatment room to help balance Rubin’s over-zealous Qi. Cindy’s knowledge was extraordinary, but even more so was her touch. Where Rubin backed away from most people petting him, he learned that Cindy’s osteopathic adjustments could melt away his aches and pains from the wild, athletic life he loved to live. She’d put his hands on his back, work her way up to his head, but by the time she got halfway through the adjustments, he was a puddle of relaxation and calmness. Even after a session, he would sleep the rest of the day and cuddle up next to us like affection was as good as racing after a ball. And at about the fifth session, he’d excitedly enter the treatment room and back himself right into Cindy asking for an adjustment.

Once Rubin got passed the fifth meeting or experience, all hesitancy faded away. His human friends got to experience this most of all. He’d be uncertain with new people in his life, but if they

stuck around, they became his fast friends. He’d greet them at that door with a wild tail flurry and yip and bark with so much excitement it hurt our ears. Then he’d rub his body against their legs, pressing himself as tightly as he could around them again and again, eventually dancing through their legs with a sense of glee. We had to be careful that he didn’t knock people down, especially my elderly parents and our more fragile friends.

But such a greeting from Rubin was a sign that you’d passed the Rule of Five test and you were now in the inner ring of his friendship circle and he would always, ALWAYS treat you with the utmost love and joy.

Occasionally though, certain people got a first class ticket to that inner circle without having to run the gauntlet of the Rule of Five. One such person was Rachael, a now-retired animal 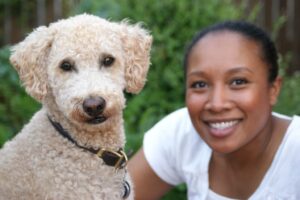 communicator. But before I tell you that story, I must confess that Ann and I always had an agreement that if one of us contacted a communicator, it could be grounds for divorce. We were both quite skeptical of the idea that people could actually talk to animals, but on the scale of doubt, I was farther along the continuum in thinking it could be a possibility.

So when I heard such glowing reviews about Rachael, I thought I’d give it a go. I mean, what could it hurt? Of course, I had to confess to Ann that I’d scheduled the appointment, so I sat her down and said, “I know this might mean that you’ll divorce me, but I’m going to give it a try because I think your belief in us is stronger than your disbelief in animal communicators.” She laughed. I got lucky!

At the time, we had adopted Dezi from our neighbor who had tragically died and Dezi had been diagnosed with an inoperable tumor in his ear. Dezi had lived with us for a little over two years at that point, and while I felt our connection and understanding of each other had grown

immensely, I was uncertain how aware he was of everything that had happened in his life and was about to happen in his life. So the meeting with Rachael was mostly about Dezi. I just took Rubin along because I thought it would be interesting.

It was a long drive to Rachael’s studio and the dogs had been in the car for most of the day as I ran errands and did some work before we headed north. I let them out at her studio, where Rachael greeted us with her magnificent smile and welcoming demeanor. Instantly, Rubin started whining, just like he does when he saw his inner circle friends. He raced to her, did his dance around and through her legs, talked himself silly, and smiled so wide I wasn’t sure if I’d accidentally brought someone else’s dog to the session. Once he finished his wild greeting, he ran to her studio and stood in the doorway as if to say, “Come on! Let’s get started!”

“I guess he wants to go first,” I joked with Rachael, for even I could read his communication at that point.

And this is what made me a believer. Not only did Rubin instantly fall in love with Rachael, he sat next to her the entire session, the same smile on his face he’d had since the beginning and as close to her as he could possible get. At one point I told Rachael about the dog in our neighborhood that Rubin hated and asked what I could do to make him feel more relaxed. She said, “Oh that big black dog. He hates that dog.” With those words, Rubin raced over to the

window and started barking. “Because we’re thinking about that dog,” Rachael explained, “He think the dog is here and has to alert us.” And then calmly she said to Rubin, “He’s not here, buddy. We’re just talking about him. You can relax.” Without hesitation, Rubin stopped barking, walked back over to Rachael, and resumed his position, pressed up against her, smile on his face.

There’s so much more from that session that amazed me, but knowing Rubin’s initial reaction to meeting her, how he responded to her as if he understood every word she said, made me trust Rachael immediately. I left my skepticism in that studio, went home and tried to explain to Ann what had happened, and from then on, employed Rachael at critical junctures of our dog’s lives.

Of the thousands of photos I have, I only have a few that show Rubin with his favorite people. In some ways, I find that odd — thousands of photos of Rubin on adventures with us and with his dog friends, but very few with all the people who meant as much to him as the dogs in his life. It’s one of those realizations you have after someone is no longer here – you can never go back and take more photos of them in all the moments you remember having with them. Still, it took a long time to get Rubin comfortable with cuddles. Sure wish I had a few more photos of it.

Perhaps that is as it should be though. The memories have more depth and breadth than any photo can ever capture. Even this morning, when I sat in meditation trying to clear my mind of all the chatter and clutter, I realized there was a weight next to me. It was Rubin, though it wasn’t really. He loved early morning meditation time and would sit next to me on the couch, his head resting in my lap, and sigh deeply as I watched my breath. Now when I meditate, I can sometimes feel him near. It’s ethereal and difficult to grasp for any length of time, but he’s there and there is no photo in the world that could capture that feeling.