When Life (and Death) Get in the Way 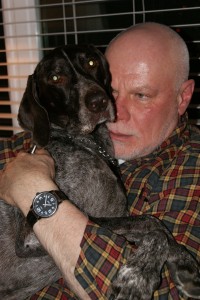 I had every intention of writing a blog last week about the smell of spring and the blossoming flowers and the joys of this season. Last week came and went and so I vowed this week to knuckle under and get the blog done. I had titles for the blog all written down, I just had to choose one. I had photos all lined up, I just needed to input them. On our walks, I’d think about the flow of the stories, the particular things I wanted to share, and those quirky insights that can only come from a dog dog walker like me.

Then life happened. And yes, death too and all the sudden those words and pictures and stories took a nap somewhere and I have been unable to wake them up from their neglectful slumber. Instead, a whole bunch of other words and pictures flooded my mind — stories about my two dear friends, Ben and Ginger, who both passed these last two weeks. 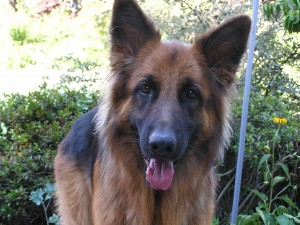 Both Ben and Ginger came into my life about the same time though neither of them met the other.

I met Ben because he was the family dog of our good friends Doris and Stephen. I was a puppy when I first met big Ben (which means ENORMOUS from a puppy’s perspective!) and he greeted me as he always greeted me from that day forward — barking (loudly and closely) in my face. I guess I knew early on not to react partly because Ben was 10 times my size at that first meeting and partly because I could tell, even at my young age, that Ben was all commentary and no bite.

Once Ben realized I was “okay,” we became fast friends. He’d chase me around his backyard and I’d slow down when he couldn’t keep up. He’d bark at me 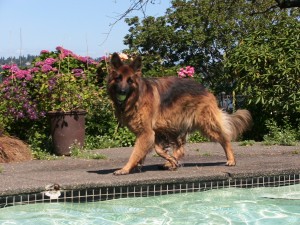 while I swam in his pool and I’d watch him perfect his mastery of tennis ball catching from the second floor balcony. Lots of people were afraid of Ben partly because he was an enormous shepherd, but party because his way of greeting you was to grab your hand or arm in is mouth and try to lead you somewhere.

Okay, so probably not the best trait, but if you knew it was coming, it was kind of endearing. He didn’t try that with me, just humans, but he loved to bark 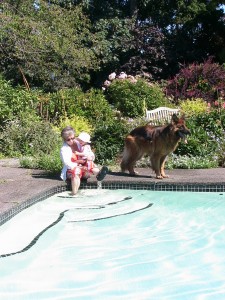 and that’s what he’d do when I first step through the front door. He’d bark about an inch away from my face and I’d scrunch up my eyes and lift my head and just wait for Ben to finish. Then we were off — racing, chasing, collecting the millions of tennis balls in the backyard, and for me, diving into the pool.

Ben didn’t like to swim though once he accidentally fell in while he was chasing me. That scared him for a bit, but regardless of his fear of swimming, he still loved his kiddie pool that his parents filled up for him when the weather go too hot. I wish we had a photo of that because Ben — all 90 long, lean, and furry pounds of him was about twice the size of the kiddie pool. Still, he’d curl up in that pool — his tongue stretched to the ground — and cool off. It took days for that long coat to dry, but no one cared. Ben was happy and a happy Ben made everyone smile. 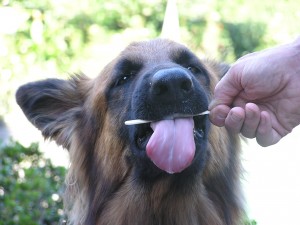 He also liked the hose. This was probably another bad habit, but Ben would bite at the water coming out of the hose and the hose itself whenever anyone watered. And there was a lot of watering to do as Ben’s garden is HUGE. He also liked to bite at other gardening equipment too — rakes, shovels, wheelbarrows — but everyone knew it was all a game to him so they’d just laugh.

Perhaps my favorite Ben trick though is how much he loved to catch tennis balls. His Dad, Stephen, would tell Ben to go up the stairs to the second floor 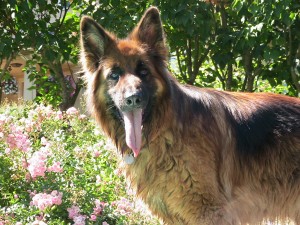 porch and over the railings (or through them) Stephen would toss a ball and Ben would leap straight up and catch each and every one. That was a sweet trick, but the really sweet part was when Ben, the ball held by the very edge of his teeth, would place the ball on the bottom rung of the railing, balancing it there and then, with his majestic German Shepherd nose, slowly push it off the porch to Stephen (and me) waiting down below.

For the longest time, I didn’t realize Ben was pushing the balls over himself and I thought there was a special hole in the ground the tennis balls came up from. I’d stand below the porch and watch the ground, waiting for the ball to bounce up. Not until much later in our relationship did I realize the balls were falling down and Ben was the culprit. I’d catch the balls and run away with them thinking I was in charge of the game, but as I mentioned earlier, their garden grew as many tennis balls as it did flowers so Stephen and Ben would just keep playing and I’d head back over and watch the ground for the next ball to pop up. 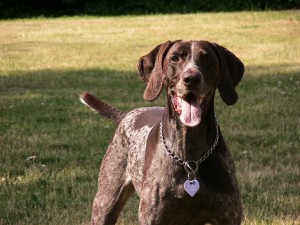 I met Ginger by accident when I was a wee pup. She and her pops would go for long, 2-hour walks down through the park and to the lake. We’d pass by them all the time and every time, we’d greet and get all excited. Her dad, Richard, always carried a satchel filled with all sorts of toys most of which he’d picked up on their walks. Tennis balls, footballs, rubber balls, and my favorite, those big red rubber balls you find at playgrounds. (They did not last long in 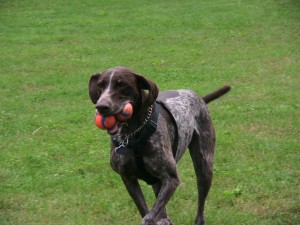 my jaws — for some reason, they popped within seconds.) Ginger loved to play fetch and she’d chase after every ball Richard threw for her often carrying two balls in her mouth at once! Amazing!

Soon Richard and Gretchen started talking — first about dogs and then about all the other trivial stuff of life and they realized they had a lot in common. Richard and Gretchen became fast friends and he’s the one who got me started dog walking and helped me build my website and blog. Ginger inspired me too since she had her own blog as well. But while the adults chatted about this and that, Ginger and I were all about playing fetch…and chase!

Since I was younger than Ginger, I’d often get to the ball first. Ginger was really good at sharing, but I think the reason I liked to be chased to this day is because Ginger would chase me around howling her disapproval because I had confiscated her “favorite” ball. She didn’t really have a favorite though she always seemed to love the one I had, so I’d race off with Ginger following and howling and we would make quite a game of it. 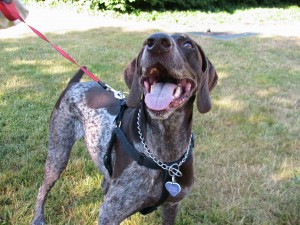 Ginger had more energy than any dog I’ve ever known. Even as she got up in years, Ginger would see me and get all excited. She wanted off leash so she could run around and make a lot of noise. She’d see me coming across the field and race all the way too me even when she got all arthritic and stiff. I’d

wiggle myself silly when I saw her and off we’d go playing fetch and chase until finally we couldn’t stand up anymore.

Ginger was quite the swimmer, too. Her pops would take her to the beach and Ginger motored out after toys as fast as she did on land. Yes, all the while barking and whining and howling. Richard used to say she was a nutty dog and that she’d be that way until she died. I didn’t think of Ginger as nutty but rather as passionate and verbal. She knew the world had tons of fun to offer her and I’ll be damned if she wasn’t going to snatch it all up in one big bite!

I think that’s what both Ben and Ginger taught me — Carpe Diem! They both seized the day every moment of their lives. They kind of had a lot in common, too, now that I think about it. They both loved to play fetch and they were both very forward and talkative. Okay, so Ginger liked to swim and Ben didn’t, still I think if they had ever met each other, they would have loved each other the way that I loved them both. 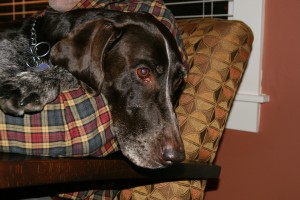 But as it happens, they never did meet — I am sort of their link; the common denominator. I know that humans view death in a very different way than dogs do. They see it as an end, but we see it (and this is clear to me now with the passing of my two buddies) as the next phase of our existence. I have no doubt that Ginger and Ben are in this next phase getting to know each other and telling stories about us. Ben has a million and one tennis balls all scattered around him and Ginger is racing across a field inviting Ben to come after her with two tennis balls in her mouth. They are pain free now — strong bones, fluid muscles, and big powerful hearts  — and while we must carry the pain of their loss and their absence, it is in the missing and remembering them that they stay with me forever.

Goodbye dear friends. I will always love you, Nutty Ginger and Gentle Ben.  Thank you for being both my teachers and my friends.

Rest in peace. Your forever friend,