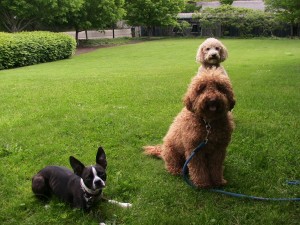 The Power of Treats

Dog Whisperer, Cesar Milan, says that he can rehabilitate damaged dogs by introducing them to his pack of 30 dogs. That’s all well and good, but I say you can have more power if you have treats in your pocket. Well, at least it works for the packs we walk. The only way Gretchen can get a photo of all of us all at once is when she pulls out the treats.

See how well it works for Ollie, Lucy, and me?

It really works on Lucy most of all because if Gretchen didn’t have treats she’d be stuck trying to get Lucy to hold still.

Lucy never holds still, but then again, Ollie rarely does either. I’m the only one trained to stay still. 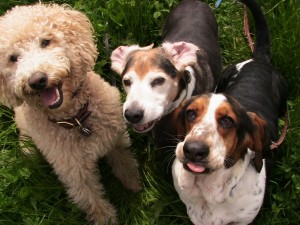 I mean, look at us! Even Riley and Rufus lift their noses from their constant sniffing to get even the tiniest snippet of a treat from Gretchen’s magic pocket.

I guess I’m a pretty lucky dog because I get treats all the time. Well, not all the time. I have to be a good dog — I have to walk by her side without pulling, I have to sit at busy intersections and wait for her okay to move ahead, I have to give up the ball after I’ve fetched it, I have to do so many things that none of the other dogs have to do to earn a mere morsel from her pocket, but hey, I’m trying to be a good role model.

While the power of the pack might help rehabilitate dogs, the power of Gretchen’s magic pocket treats can get even the most stubborn, obsessive, and goofy dogs to pay attention. I mean, even though Riley has his ears on backwards, he’s seriously focused, wouldn’t you say?

We spent the day, as you can tell with Ollie and Lucy first and then Rufus and Riley. Here’s how it all went down…

Lucy played fetch…are you surprised? Me neither. 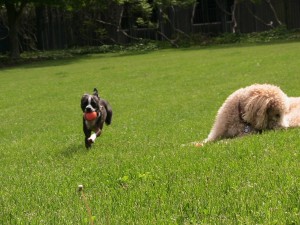 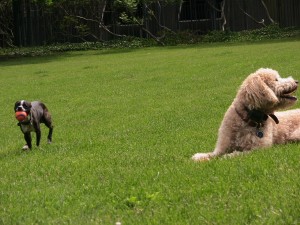 And while it looks as if I laid around all morning, I actually played fetch as well… 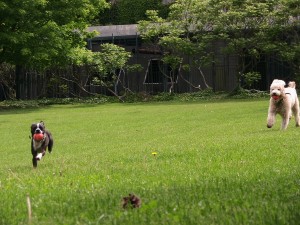 Just not as much as Lucy. In fact, for every ball Gretchen threw for me, she threw five more for Lucy. That’s how tireless she is. 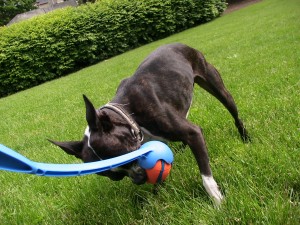 Right after this shot, Lucy ripped the ball out of the chuck-it and jumped onto Gretchen while shoving the ball into Gretchen’s hip. Tireless I tell you, tireless. 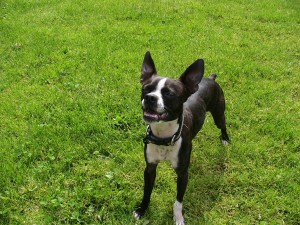 Ollie doesn’t play fetch. Ollie hovers until, for some unknown reason, he takes off running. 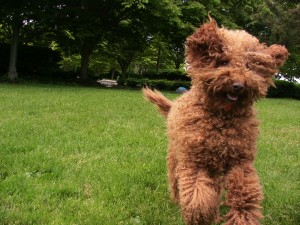 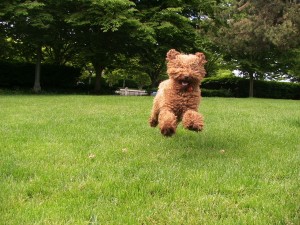 Then he stops just as suddenly as he started and does something else crazy like roll around in the grass. 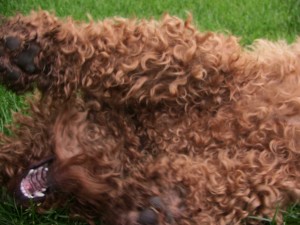 Or decide that the ball is not exciting, but the chuck-it sure is fun to chew on! 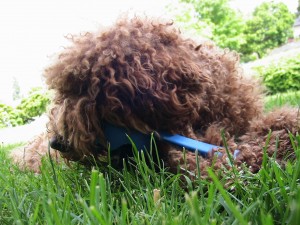 Or just hanging out with me… 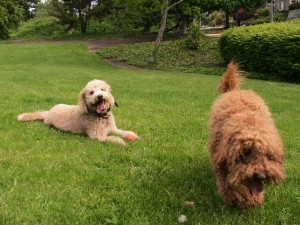 If Gretchen had a wider angle lens, you’d see Lucy in these pictures, too. She’s at Gretchen’s feet focused on you know what! Okay, I can get a bit focused, too! 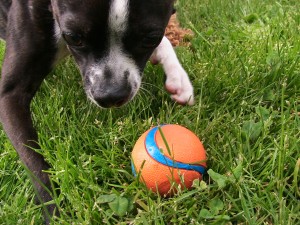 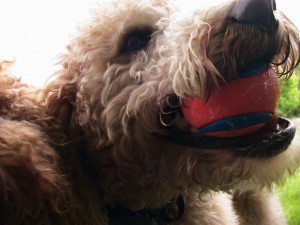 After our game at the little field, we took Ollie and Lucy back home and then drove to meet up with Rufus and Riley. Though the skies weren’t as blue today and the wind was threatening to bring in rain, it was still really warm and when it’s warm, it’s hard to get the boys moving. Gretchen said it’s like dragging bags of flour trying to get those boys down the road so she’ resorted to, you guessed it, TREATS! 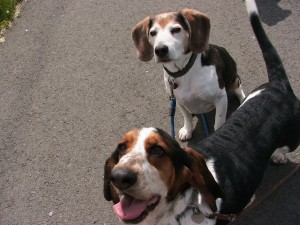 Once she gets them focused on the treats, she runs backwards down the trail and we all follow after…yep, me too because she had some extra yummy treats today! 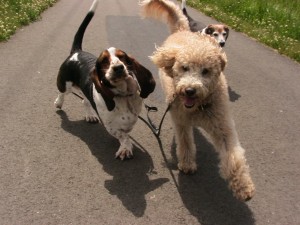 See, those boys are happy and tired…they had to run to earn any treats from Gretchen’s pocket and you should see how those stubby legs can move when the treats are that yummy! 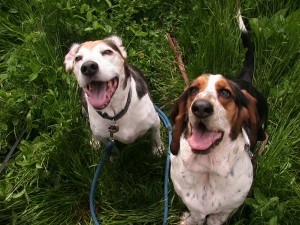 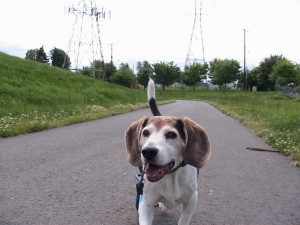 Okay, it doesn’t work all the time. Sometimes their noses are overpowered by things they find in the grass. 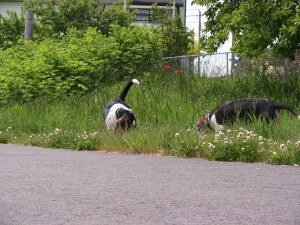 But these boys don’t move to fast and once Gretchen yells out “TREATS!” their noses refocus on the hand that feeds them! 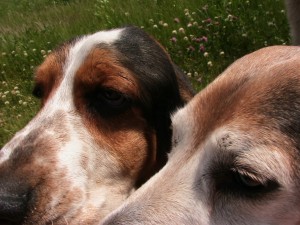 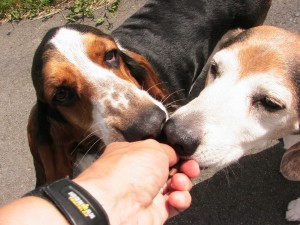 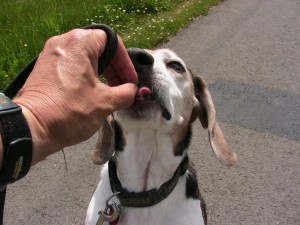 While the boys are entertained by their noses, I spend my time scratching my back on the rough cement trail. Awe, that feels nice! 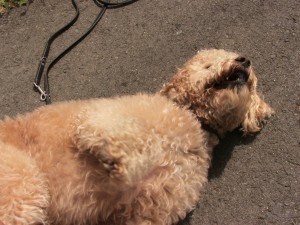 I tell ya, there’s nothing better than a nice back scratching, playing with friends, and some good old treats from the magic pocket. Don’t ya think Rufus and Riley?

I’ve just had the last of my dinner that I ate in parts tonight. I think my belly was a bit full from all the snacks I had today.