Last night, before we were going to bed, we went out for our last stroll. I 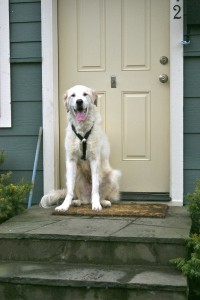 use the word stroll because that’s kind of the extent of what Max does. He doesn’t go far, but he’s slowly learning to maneuver the steps (down and up) all on his own. He goes out, does his business, and then saunters (perhaps another good word for his walks) back into the house to plop on his bed.

But last night, in the darkness of the night, he went out, stopped on the porch for a second, put his nose in the air and stood reflective in thought. Antonio, our neighbor, was out on his porch, too. 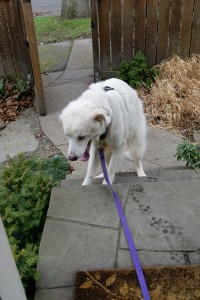 “Oh man, I thought he was a buffalo!”

I looked back then and realized that yes, Max did look like a white buffalo standing on the prairie of our urban porch.

“White Buffalo are very sacred,” Gretchen told me, which was just

enough to get me to start some research. This is what I learned:

It’s a Lakota story, though many of the Plains People have a similar belief.

The White Calf Woman brought the sacred pipe to the people and taught them to pray.

She taught them of the Seven Ceremonies which are: 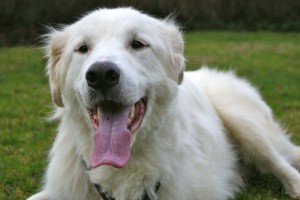 Okay, so I’m not going to reach here, but if you think about it, some of these ceremonies are important for Max.

First, he does look like a White Buffalo and while there are times when my Labradoodle jealousy worries that my moms love him more than me, I’ve realized Max is teaching me some very important lessons (more about that in a later post).

But even more important than that, many of the ceremonies pertain to Max. While we don’t have a sweat lodge for him, we’re doing what we can to make certain he is being “purified” with clean water and good food. When he first came to us, he was eating a raw food that was a lot like liverwurst. It was good (I ate it), but we wanted something not so packaged and filled with more good stuff. 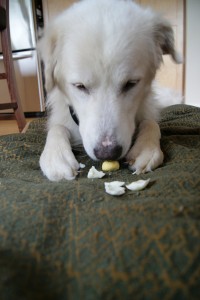 My food, raw beef with veggies and bones from the Natural Pet Pantry, was what we offered him (in addition to his liverwurst roll). He gobbled it up and, in fact, ate my beef first and then, since he was still hungry, ate the liverwurst stuff.

We need to put weight on Max so we’ve been offering other foods too. The latest are cheese (to see if we can motivate him to move outside the house more…again, more explained in a further post and a bit here) and hard boiled eggs.

He LOVED the cheese and even moved for it after some coaxing, but was a bit skeptical of the hard boiled egg (which I understand since I don’t like them at all!) He wouldn’t eat the egg at first, but Gretchen left it on his bed and what do you know — gobbled that rubbery orb down like a champ!

Next, the naming ceremony. Yes, his name is Max and he responds to it. But we’ve also nicknamed him Maximum, Maximilian, Maxie and now Buffalo. 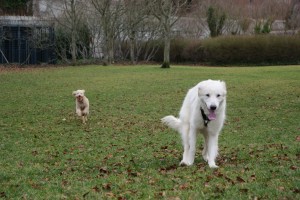 The healing ceremony has been an incremental feat. Max would prefer to lie on his bed all day, but since he’s here to build muscles and such, we’ve taken to giving him lots of exercises to do. Standing is one. Standing up to drink water is another. Standing from a sit position, standing with his front feet on a step while holding his weight up, and climbing stairs (up and down) are others. We walk him out to the far corner of the yard and then go back into the house. He follows — across the yard, up the stairs, and into

the house — all on his own.

Today we took him out to one of my favorite places that we call the Little Field. While I played fetch, he “explored” the field with some help from Gretchen. And once out in the field, we made him walk all the way back to the car. Whew! He was 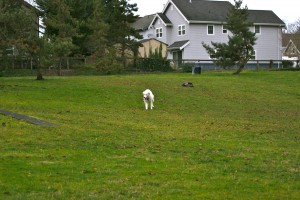 pretty tired after that, but not too tired to eat his lunch.

The Making of Family ceremony is a work in progress. We’re doing all we can to help him “get on his feet” so he can find the perfect adoptive family. Daily I picture him on a big farm somewhere walking across (and maybe even running) an open field where sheep and goats 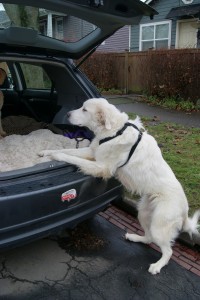 frolic with him. I’m hoping that by holding that vision, it will someday be manifested in his actual adoptive family. But as I’ve said, this is a work in progress.

The Marriage ceremony doesn’t really pertain though perhaps we can “marry” him off to a female dog at the family of adoption I’ve envisioned…if there’s one thing I’ve learned about Max, he loves the ladies (sure, he likes me too, but his tail really really wags when a female dog is around…but again, more about that later). 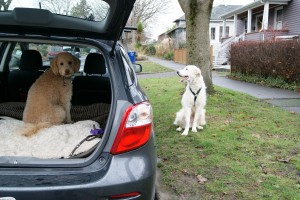 t’s obvious, I suppose, that Max is on his own Vision Quest, but I think he’s spurred on my own. It’s too early to tell what will result from this journey, but every day we learn something about each other. For instance, I’ve learned that Max is okay with me lying on his bed and sharing food from 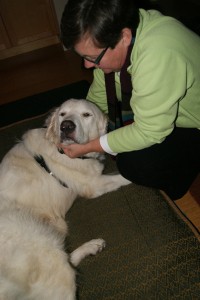 his bowl. He’s learned that stairs aren’t as big of a challenge as he’d imagined and that Ann is the best cuddle-companion ever!

I’m learning more about the Sundance Ceremony — many different indigenous/first nation people practice it and they each have their own distinct traditions — but for now, I know that this sacred ceremony perhaps defines our whole, small journey with Maxie the White Buffalo.

And finally, I found this on the internet (pertaining to the drawing of spiritual cards):

If you have drawn the Buffalo card, you may be asked to use your energy in prayer. You may also be called upon to be an 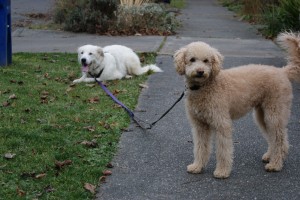 instrument of someone else’s answer to a prayer. This could portend a time of recognizing the sacredness of every walk of life, albeit different from your own. To honor another’s pathway, even if it brings you sadness, is a part of the message that Buffalo brings. This may be a time of connection to the meaning of life and the value of peace. Most assuredly this time will bring serenity amidst chaos if you pray in earnest for enlightenment and power of calmness and give praise for the gifts you already have.

that you achieve nothing without the aid of the Great Spirit and that you must be humble enough to ask for that assistance and then be grateful for what you receive.

There’s so much that I comment on here, but suffice it to say, I am practicing grateful for what I receive and the art of prayer.

Rubin and the White Buffalo