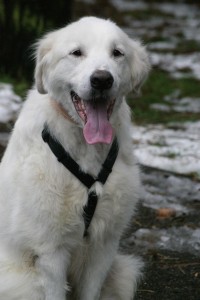 I have never before seen each step I take as a gift, but this morning, as I raced down the stairs I quickly looked back over my shoulder and there was Max, panting and smiling in that way that he does – equal parts pain and joy – sitting at the top step, pondering his descent.

“That’s impressive, Rubin,” he said to me and for a moment, I hadn’t a clue what he was talking about.

“Your ability to fly down the stairs,” he said in response to my cocked, questioning head. 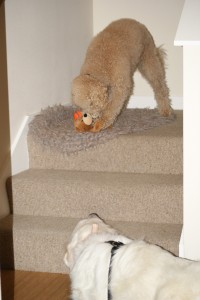 “Oh that,” I said a bit stymied by my own nonchalance, “I don’t really think about it much.” And then I felt kind of stupid.

We’ve developed quite a routine around this house and most of it revolves around getting Max from one place to the next. Or perhaps another way to look at it is to get Max from one soft landing to the next.

Yes, Max can walk, but the effort it takes for him (and for the humans) can be exhausting. Last night, for instance, after Gretchen got off work, we met our friends at the park for a evening romp. Max really wanted to go so he was loaded into the car and then unloaded at the park.

I wish I had photographs, but dusk had already descended and the light was too blue-black for the camera. Despite the patches of snow on the ground, Max made his way down the gentle slope to a large tree where he sat and then laid down in the one patch of green exposed.

He was exhausted, but the smile on his face said it all – he was with friends, outside, and in the snow. We let him hang out there for awhile before he lumbered back to the car with Gretchen’s hand on his harness to steady him. Then I played with my friend Paige, chasing the smells through the bushes of the darkening night. 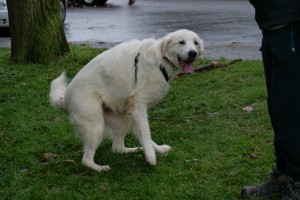 That was a big outing for Max who generally walks to the back yard or the front walk to visit with neighbors or just hang out on the porch. He likes people. He adores them in fact and every visitor is enough of an event to get him off his bed and waddle down the hallway to say hello.

And each night, after we go outside for our final pit stop, Max makes his 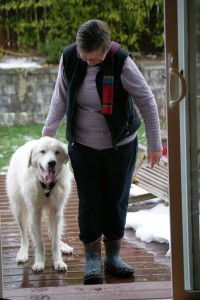 way to the bottom of the 16 stairs that lead up to the bedroom. He sits. He stares at the carpeted steps. Then slowly slides down, waiting on his haunches for Gretchen to lift him by his harness and for Ann to lift him with a strap to his hind end and carry him up the stairs.

At the top, he rests by the bathroom then picks himself up and moves to the bed laid out for him complete with warm blankets and his own special pillow. 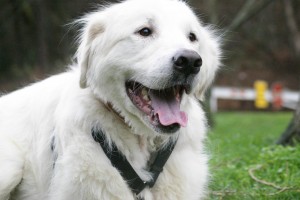 He’s been in a lot of pain recently. Yes, he’s taking Rimadyl and that’s helped, but we had to up the dosage so that he could sleep comfortably at night since turning over or shifting positions often caused him to yowl in pain alerting everyone (me included) that all was not right in the world.

That’s when Gretchen gets up, lays down next to him, and gently massages his curled body back into a more relaxed position.

His breathing is shallow most of the night, but eventually he’ll give a big sigh and everyone in the room can feel him relax into sleep. Now, with the increased dosage, there have been no more night howls though Gretchen still “rocks” him to sleep with a massage.

Then in the morning, Max rises. The sound is audible from every part of the house – 82 pounds of dog hoisting himself up and slapping his long legs across the carpeted floor to the top of the steps. That’s when we all spring into action — Gretchen on the front harness, Ann on the back — and they 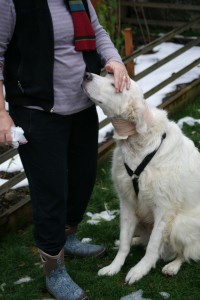 lift him down those same 16 stairs and out the back door to the yard where Max takes his pause in privacy and contemplation.

The morning is spent lounging in the living room — Max on his bed and me on the couch — while Ann reads the paper and Gretchen spends time cleaning up Max’s skin infection, attending to his infected ear, and attempting to get some food in him so he can receive the antibiotics and pain medications on a full stomach.

Yes, eating has become a challenge, too. Max eats well for a day or so and then the food that we think he’s fallen in love with interests him no more. Yogurt one day is the best stuff around, then cottage cheese, then chicken, then raw food, then kibble, but eventually each falls from favor and we’re left trying to figure out what might interest him next. 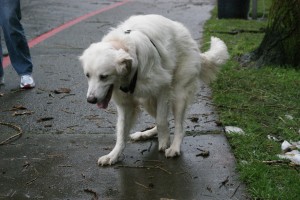 Today, in fact, Gretchen’s making meatloaf to see if that will entice him. I’m certainly enticed, but after Max’s comment this morning — the comment that got me to thinking about all the things I do with ease that Max cannot — I’ve decided to be a bit more sensitive about my eagerness.

It’s hard. This afternoon, for instance, we met up with our friend Jeanne at Seward Park — one of my favorite walks on the planet — and we brought Max with us. He did his 50 feet of walking then waited in the car while we made our way around and through the park.

“I feel bad leaving you behind,” I said to Max.

He looked at me…that way he does…and said, “You go and enjoy yourself, Rubin, and then tell me all about it when you get back.” 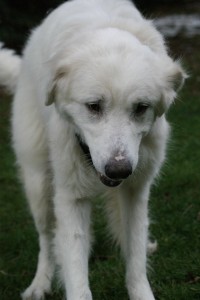 Wednesday cannot come too soon. That’s the day we see the neurologist and we’re hoping that he will have good news for us.

Oh how we’re hoping. Max is clearly in pain and yet he keeps trying, but I can tell it’s all taking its toll. He sleeps more these days. He doesn’t eat as much. And his tail wags less than it did before.

Of course, then he surprises me and he’ll get up off his bed, make his way to the front door to meet a new visitor, and that tail will wag like there’s not a thing wrong with Max’s body.

But then it’s back on his bed where his breath sends an undeniable rhythm around the house. This guy has wormed his way into my heart. And it doesn’t help that he’s decided to read Pam Houston’s novel “Sight Hound” where the epigraph reads: “I know that hope is the hardest love we carry.” (Jane Hirschfield) 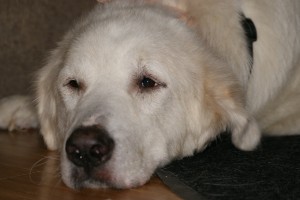 It’s raining outside. A hard, steady rain. Our walk at the park is perhaps the last real walk of the day. The snow is mostly all melted, which is good for everyone’s mobility but our paws will be muddy for the next week to come.

There’s been so much “liquid” this past week and more predicted for the rest of the week that huge puddles will form in the backyard and on the street, the threat of floods every where since the water has no where left to go. That’s the way of winter where we live and for most of my life I’ve never really thought about it.

But lately, with Max living here, I’ve been thinking about a lot of things more than ever — like rain, and stairs, and the gift of my mobility. Whatever happens with Max, he has taught me more in the past two weeks than anyone I’ve ever known. I now look at the world differently and I look at my place in the world differently, too.

Carrying this hope and love is hard, but I’m still carrying it…waiting for Wednesday…my paws crossed. Cross yours too!