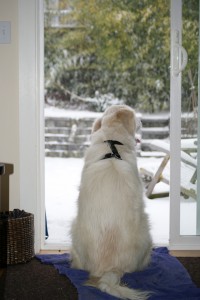 We ask a lot of questions at our house. Every morning I hear — “Ready to get up?” “Shall I make you breakfast?” “Wanna go for a walk?”

Come to think of it, I am “asked” a lot of questions during the day and apparently my answers are pretty clear. “Want to play in the snow?” my tail wags uncontrollably. “Wanna put on your boots?” I suddenly I find myself racing up the stairs to hide behind the bed.

When Max came to live with us, we spent time asking him as well. “Do you want some lunch, Max?” “Ready to go out for some exercise, Max?” “Want a massage, Max?”

Unfortunately, we’ve learned that asking doesn’t really work with Max. He gives us this stare that clearly says, “Please love me” and that’s about the extent of his answers.

That’s all well and good, but Max is a big dog (82 pounds at his last weigh-in) and so getting him up to go outside or to head upstairs to bed can be a challenge especially if there is just one human in the house. You see, sometimes Max is very stubborn. If he doesn’t want to get up, he just rolls over and says, “Not today. Maybe tomorrow, but not today.” 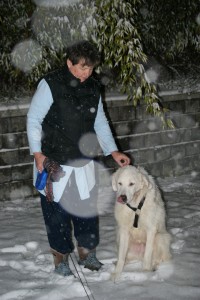 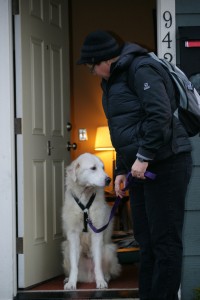 He can be the same with his eating, too. Some days he has a great 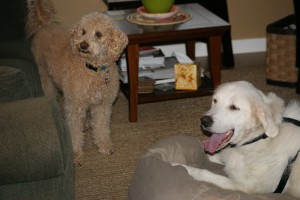 appetite and other days he turns his nose up at the offerings. Part of this is, in no doubt, a response to the pain he’s feeling, but sometimes I think he’s just being a bit picky and stubborn (kind of like how I can be with food). 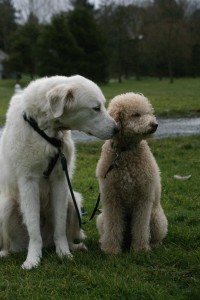 We’ve learned, through our research, that this is very much a Great Pyrenees trait — they are independent and, if you remember from an earlier post (Temperament) “not a breed for beginners.”

The other issue is, as I’ve stated above, Max is in pain (it’s better now that he’s on medication, but still, at the end of the day, he is sore and less likely to want to hoist himself off his bed to make the long haul up the stairs) so as much as we’d like to hoist him up ourselves, we have to be very very careful of jarring, twisting or jerky him in any way that might hurt his neck.

And Max will let you know when he’s in pain. True, he is very 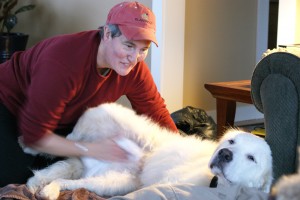 over-dramatic (as his vet said the other day), but we’re glad he lets us know that it bothers him because most of the time he is incredibly stoic.

So we’ve had to be creative in our motivational techniques. Gretchen says the best technique so far has been Ann. Yep, Max LOVES Ann and so, wherever Ann goes, Max generally follows. But Ann

isn’t always here so that means I have to be the motivator.

We learned this the other day when, after feeding Max and getting him outside to do his business, Gretchen and I went out for our own walk. We leashed up, said our goodbyes to Max, and walked out the door. As Gretchen turned to lock the front door, we heard this mournful howl — once, twice, three times — and we realized that Max was calling to us.

We opened the door again and there was Max, sitting his sad self right 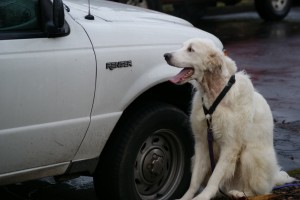 by the front door asking to go with us. So we leashed him up, helped him down the stairs, and went on a very short walk on the front walkway. Max, as he often does, walked straight to the car and when we told him that we weren’t going in the car, he walked to the next car (a truck) and sat down as if that was the next best choice for transport. 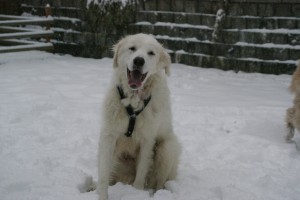 We had to convince him that walking was all we were going to do and that driving had nothing to do with it. He eventually figured it out and after a short jaunt up the street a ways and then down, he was ready to go back inside for his nap.

Another great motivator has been the snow and the neighbor kid, Micah, 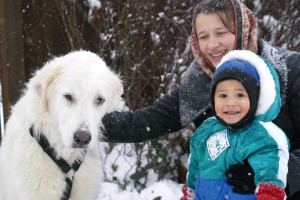 next door. Max will roll himself out of bed, walk down the stairs (with assistance) and straight over to Micah if he hears that little kid voice of his. And Micah is happy to oblige. And the combination of snow and Micah in his adorable snow suit accompanied by his own two dogs (Oshi and Perrito) makes Max downright giddy! Max hung out in the snow for about a half hour, lying in his bliss with Micah playing in the snow all around him. Very sweet. 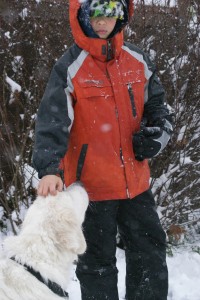 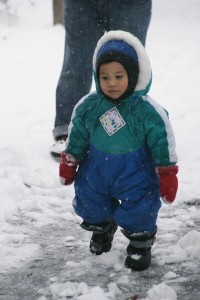 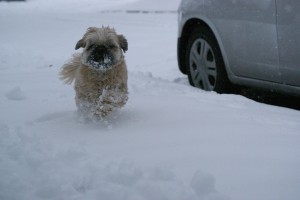 But Micah and snow and Ann and even I can’t always be there to motivate Max so we end up doing a lot of asking that sometimes Max just ignores. That’s when it occurred to me — we need to stop asking. “Gretchen,” I said, “I think Max needs to be invited and not asked.” 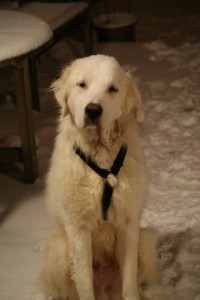 You may think that an invitation is no different than asking, but the subtleties make all the difference in the world. First off, when you ask there is the assumption the other party will comply. Max, while compliant in many ways, isn’t always so. He is not a “pleaser” kind of dog. Not that that’s a bad thing, it’s just who he is.

He doesn’t do things to please others. He does things because it is what needs to be done. This is, no doubt due to his “protector” genetics and so, when he hears Micah squeal in the

snow, Max wants to make certain Micah is safe during his play time.

An invitation, on the other hand, allows Max to choose and Max likes it when he has choice in his life. So when I told Gretchen of my thinking, she totally agreed. 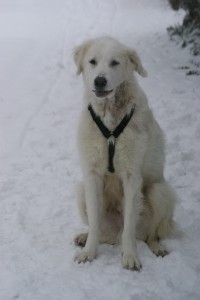 “But,” I added, “It’s not just the wording, it’s the intent of what you project.”

Gretchen was very impressed with my insights and she had to admit that it was true — simply saying, “I invite you to go for a walk” means nothing unless your intention is true and honest.

Max agreed. “I don’t need to hear the words,” he informed us. “I need to feel the invitation in your heart.” 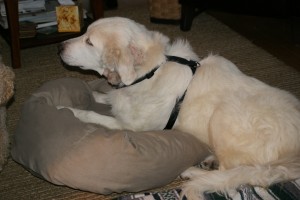 Max is an incredibly sensitive guy. He wants to be with us — loves his pack — and he wants to be included. In his book, nothing is better than a session of massage or bathing or just staring into each other’s eyes while human hands stroke his back or massage his face.

And if you’re going to get in the car, Max wants to go along even if he doesn’t necessarily go very far once you arrive at your destination.

So around this house we walk with invitational intention and amazingly, Max has been more willing to follow our invitational lead.

Of course, the snow helps…we’ve realized that Max adores the snow and wants nothing more than to go outside and lie in it! Yes, that’s his breed (mountain dog at heart) so we’re hoping for a future of snow dog 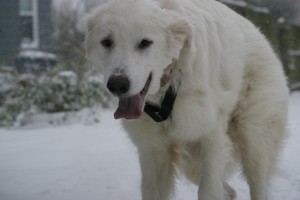 days for our dear friend, Max.

Quick Update: Max is scheduled to see the neurologist on January 25. At that point he’ll tell us if the deformities in Max’s neck (Wobbler’s) can be surgically repaired so that Max might have more mobility in his life. We know many of your follow Project Max and have sent lots of love and support via the internet. Please hold Max in your thoughts for a positive

diagnosis/prognosis with the neurosurgeon next week. And thank you all for keeping Max in your hearts, thoughts, and prayers (it all helps)…he feels every ounce of your support!

And stay tuned…I’ve been giving Max lessons on how to use the computer (the keyboard has been a hard task to teach with his enormous paws)…Max is going to write his first blog soon!