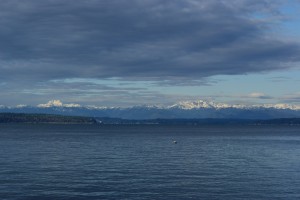 12 days ago, when we traveled to Vashon Island to pick up Max from his long-term foster Mom, the sky was robin’s egg blue, the air was crisp with a winter chill and the mountains in the distance were covered in white — a beautiful sight as we crossed the water on the ferry.

12 days later and we’re snowbound, while ice pellets ting against the windows and the threat of a power outage looms. For a dog like Max who struggles with mobility on a good day, walking through 6 inches of snow layered with ice like a over-baked pie crust the challenges must feel insurmountable.

At least, that’s what I thought as I struggled to wade through the 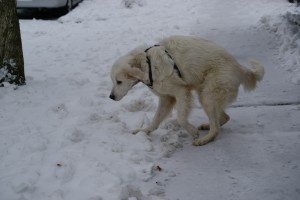 mine-field of our backyard, my curly feet painfully and awkwardly slicing through the crust of ice encasing the snow of the past few days. Let’s just say, the challenge was so precarious for me, I went out, did my business, and headed back into the house — something I never do. 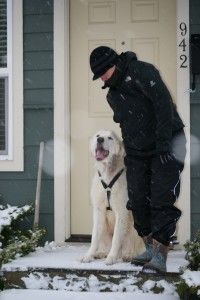 So when Gretchen and Ann maneuvered Max down the stairs and out onto the deck none of us thought he’d make it very far on his own. I mean, if your balance is already shaky imagine throwing in a skating rink into the mix. But once they let go of his harness, Max amazed us all. Off he went heading right for the steps that lead to the yard.

We all started to laugh. Even Max. If anyone must know what it’s like to 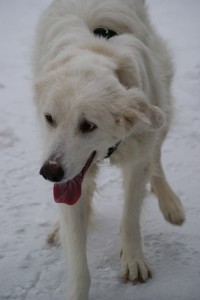 go through life doing the hokey pokey every step of every day, it’s Max. Yet here he was ready to dance his way down the last three slick steps to play in the snow and ice, ice pellets bouncing off his Pyrenees coat.

We helped him down the stairs (yes, I offer encouragement, too) and he hokey-pokeyed his way around the yard doing his business and occasionally stopping to sit or lie down for a rest. 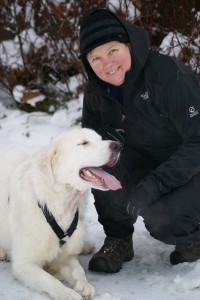 The threat of an ice-storm looms still. The governor has declared a state of emergency and our activities have been curtailed to bread making and organizing the desk and our taxes. Max and I rest comfortably, but every time Max hears the neighbor kids squeal with icy glee, he raises his head and gives a howl.

So out we go, dancing our way to the neighbor’s house to say hello to Micah and test the solidity of the ice and snow. This is when Max is the happiest and I’m tempted to offer a “semi-permanent” baby sitting service just to watch Max and Micah spend time together — it clearly makes them both so happy…despite the ice. 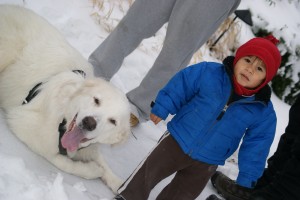 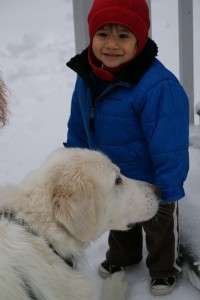 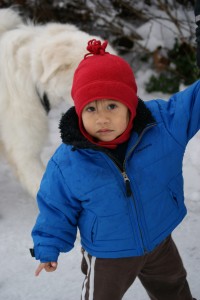 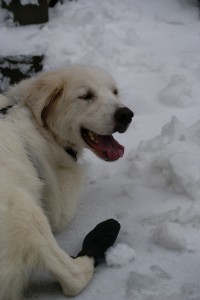 The weather service says that rain is on its way, which isn’t necessarily a blessing. Gretchen gave Max another sponge bath and has threatened to give me a real one today as well, but I’m thinking, “Why now? Tomorrow is going to be a muddy wet mess. Wait until it dries out!”

Max doesn’t agree. He loves his sponge baths and for a big white dog, he really doesn’t get that muddy and dirty. Well at least not like I do. That’s why I think Max has been good for me. If ever there was a Zen dog, it’s Max. He takes everything (dare I say) in stride. Even when he’s clearly in pain, he keeps moving, he keeps trying.

Meanwhile, the ice has turned to snow and is falling steadily. Max has turned out to be kind of finicky about food. He was eating heartily the raw food we made for him, but now he turns his nose up at it. Instead, he appears to have a hankering for kibble as long as it is not served in a dish but rather laid out on his bed before him. 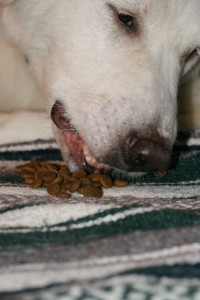 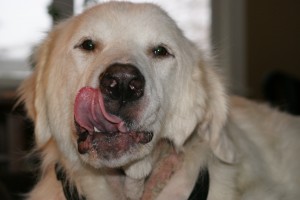 …maybe he’s right…that IS what it’s all about.

One Reply to “Hokey Pokey”