A lot can be said for friends and friendship. I know that my friends have 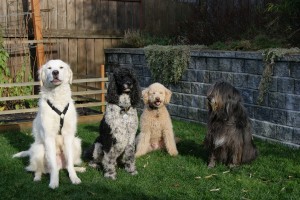 helped me in ways that are too numerous to count. For instance, Monty has helped me be a better eater and Paige has helped me feel more confident in the world.

In turn, I think I’ve been a really good friend to my pals too. For instance, I’ve helped Rosie get along with other dogs and Woobie with her exercises as she’s been healing from a broken toe.

My friendships are so important to me that I’ve been trying to figure out what it is about them that makes “friendship” so important to the life of a healthy and happy dog. I suppose there isn’t just one thing that makes friendships important, but with Max living with us, I’ve come to realize that top of the list is encouragement.

Before Max arrived, Gretchen sat me down and talked with me about his 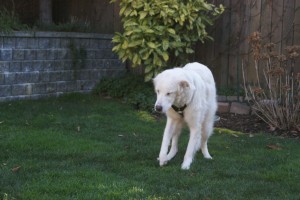 arrival. “He’s had a really tough start to life,” she said, “And he has a very long road to recovery. In fact, he may not fully recover, but we’re going to try to help him as best we can and encourage him on the road to healing if at all possible.”

That word encourage stuck with me from the moment I met Max. I thought for sure that I was going to be the one encouraging him, but turns out, he’s kind of been an inspiration to me. 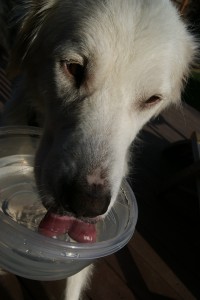 His journey to recovery is arduous. Every day he looks at Gretchen and says, “Oh no, what exercises are you going to make me do today?” While my other mom, Ann, is who Max turns to for love and attention, he turns to me for moral support.

“She works me so hard!” Max told me yesterday, referring to Gretchen taking us to the park for along walk and games of fetch — well, I played fetch and he made Herculean efforts to walk the distance she had prescribed.

After that outing, he came home very tired and woke up this morning 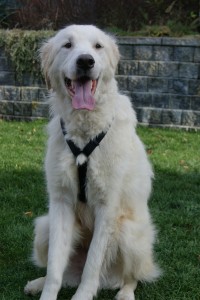 rather sore and still worn out. “Keep going, Max!” Gretchen said as encouragingly as I’ve ever heard her. “Every day you’ve got to do a little bit more and eventually you won’t be as sore or tired.”

Max has a hard time believing her and so he turns to me. “Is that the case, Rubin? Will it get easier?”

What’s amazing about this question is how watching Max get up from his bed, walk outside for a break, and climb the stairs back to his bed is such an inspiration to me. I mean, I’ve taken my mobility, and my life in general, for granted. Walking, running, playing, rolling over — I’ve always thought it was quite easy to do these things and for me — despite the intermittent over-doing it or occasional hitch in my get-a-long — I’ve always been able to move freely and strongly.

For Max, each step requires every atrophied muscle in his body to work to its fullest and a focused attention that is both physically and emotionally exhausting. 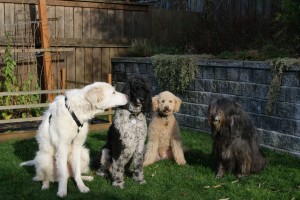 To help encourage Max to stay motivated and upbeat, I brought over some of my friends today — Monty and Woobie.

He was excited to meet them. When Max shows excitement his tail 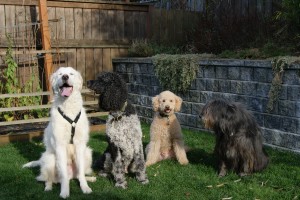 thwaps against his bed in a loud, rhythmic thump thump thump and if he’s really excited, he’ll rise up from his bed and come over to check out the new faces, new treats, or meet the new people.

Monty and Woobie are both very different dogs. Monty LOVES everyone and he has no trepidations about putting his face as close to the new dog as possible. And Monty loves to sniff — heads, tails, necks — whatever he can. 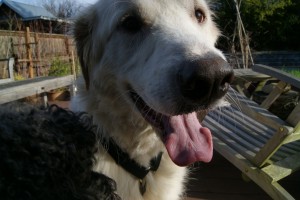 Woobie, on the other hand, keeps her distance. She likes to keep moving forward and after a cursory sniff, she stays clear of the new dog until she really gets to know them. I’ve known Woobie for over a year and only recently has she shown thrilled joy when she sees me or Monty. But with new dogs, like Max, she keeps her distance and uses her nose to check it all out when no one is looking. 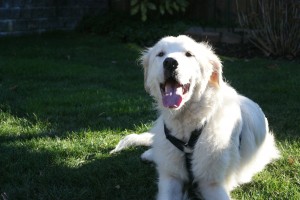 Max went swimming today, too. That’s one of the modalities we’re trying — swimming him twice a week, which also includes a therapeutic massage and proprioceptive exercises and stretches. He’s weightless in the pool and he can stretch out in a way he can’t on land. Sure, he’s not thrilled about the swimming part (he is, after all, part Great Pyrenees — he’d rather be guarding sheep) but he adores the massage.

But he’s tired after this activity as well and sleeps a very deep sleep after his swim and massage sessions. Gretchen has handed off the pool 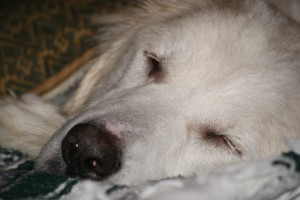 therapy to her co-workers at Wellsprings K9 — we both feel like it’s important for Max to get as much encouragement from as many folks as possible.

And often we have to educate his supporters. “Don’t feel sorry for him,” I tell them. “Believe in him. Tell him he can do it. Let your energy be healing and not sympathy. That’s what he needs now.”

He responds to that, let me tell you! He hoists himself up when positive, encouraging words are spoken to him and he wags his tail like a flag.

And he slowly moves forward one step at a time…more of which is coming tomorrow.