Rubin was the only dog for the first seven years of his life. We had lots of boarders and visitors over that time, but as for family it was just the three of us — Ann, me, and Rubin. He loved being the only dog or perhaps, as he saw it, the Number One dog in our lives, and he liked nothing more than propping himself up between the two of us at night while we sat on the couch watching a movie or talking about our day.

Adding Dezi to the mix added a visible strain. He knew Dezi — had walked with him, played with him, and even spent some time with him when Dezi’s dad, Michael, went back East to visit family over the Thanksgiving holiday. But when Michael left Dezi on our porch and then subsequently died, the dynamic shifted. At first, Rubin clearly thought Dezi was a temporary guest, that Michael would surely return, and Rubin would have his moms back to himself. But days turned into weeks and weeks 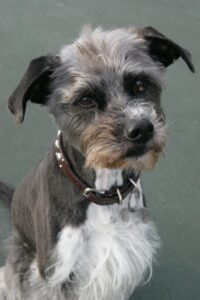 into months and then Dezi got deathly ill and all our attention was focused on getting him well. I think that’s when Rubin realized Dezi was with us forever, however long that forever was going to be.

Dezi was about 12 when he came to live with us, perhaps a wee bit older. He was a healthy dog, lean and wiry, but definitely aging and growing more gray around his face and muzzle every day. After awhile, Rubin and Dezi developed a good orbit around each other, never affectionate or cuddly, just respectful of each other’s space. Later, as Dezi’s age and the subsequent tumor in his ear took their toll, they would lie together, sharing space more closely than they ever had before.

Dezi’s tumor made him blind in his left eye and quite wobbly, his equilibrium off from the pressure in his middle ear. Our bedroom was on the second floor of the house and as Dezi’s condition worsened, he’d need to go outside two to three times throughout the night. I’d carry him down the stairs and then assist him back up, but soon it became clear that one of us was 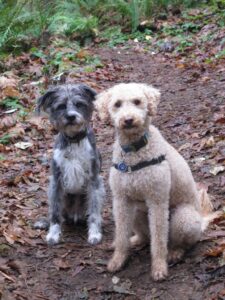 going to fall if we continued with such a routine. So Ann and I decided that I would sleep in the downstairs guest bedroom with Dezi and she’d sleep upstairs with Rubin.

When I took Rubin and Dezi to meet with Rachael, the animal communicator, one of the things I wanted to know was how Rubin felt about having a brother. “He understands,” Rachael explained. “He’s not thrilled about sharing you with Dezi, but he understands why Dezi is a member of the family and is okay with it.” Of course, shortly after this visit, Oscar came to live with us and the adjustments had to happen all over again.

Immediately, Oscar fell in love with Dezi. A miniature version of Dezi, Oscar gravitated toward him that very first day. They’d sleep close together, snuggle in the car, and Oscar always checked 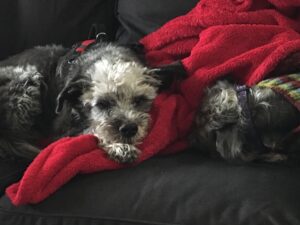 in on Dezi first thing in the morning and the last thing at night. We slept apart still, Rubin and Oscar upstairs with Ann and Dezi in the guest room with me, but it was clear that Oscar and Dezi had a connection that neither of them had with Rubin. Whenever I took Dezi for his acupuncture appointments, Oscar would go into the clinic with us (Rubin would stay in the car) and as Dezi sank into a relaxed session with a full complement of needles in his body, Oscar would lie next to him and sometimes on top of him, soaking up the healing energy.

Living with three dogs was definitely more work than living with two and with one dog ailing and aging, there were times we’d wondered if we’d taken on far more than we could handle. But

everyone got along so well that it never seemed to be too big to manage. While only Oscar and Dezi were close, all three dogs got along wonderfully, never bickering or stepping on each other’s proverbial toes. A pack of three felt whole and complete, and our house felt full and filled with that special kind of love dogs provide. The Three Amigos.

When Dezi was diagnosed with the tumor in his ear, they gave him about six months to live. He lived another year and a half. I have no doubt he lived longer because Oscar was in his life and I imagine even Rubin helped him feel that his family and all our love was worth living for. Oscar and Rubin were present when we said goodbye to Dezi. They each behaved as I would have expected when Dezi slipped from this life to the next. Rubin watched, but then was ready to go, knowing, I think, that that the body was no longer actually Dezi. Oscar just stared and sat as quietly as he could, observing all the details. I worried that perhaps Oscar wasn’t ready to say goodbye to his mentor and look alike, but aside from being sad, which we all were, Oscar recovered from the loss quickly.

After that, Rubin and Oscar were a pack of two and behaviors shifted slightly in our house. I got to sleep in my own bed again, but the dogs changed positions. Usually Rubin slept in a bed Ann 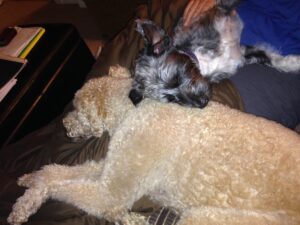 had made for him at the foot of our bed, a raised cradle, as it were, that held a memory foam mattress on which was placed an orthopedic dog bed. Rubin loved it there, but when I came back upstairs, Oscar took it over and Rubin slept on our bed again. It was a subtle shift, and I’m not exactly sure what it meant, but it definitely meant something.

On walks and around the house there was a different dynamic as well. Oscar was always respectful of Rubin, understood how to read him better than anyone. Where Rubin felt irritated and reactionary towards Dezi’s dizzy, elderly stumbles and tilted head, Rubin grew a bit closer to Oscar once Dezi was gone. He and Oscar would play together sometimes. Nothing special; just a few sprints around the yard or play bows that Rubin only did for significant friends, like Monty or Woobie. They co-existed easily and Rubin would allow Oscar to get closer to him than any other dog in his life.

As Rubin aged, we monitored the difficulty of our outings, making sure to always carry water

when we went to the beach or on the trails, and rested along the way so Rubin didn’t overdo it. Of course, Rubin was horrible at self-monitoring and he’d over-exert himself particularly on the beach, so much so at times, we had to limit how many walks he got in a day. Still, Rubin was always up for an outing and even in his last week of life, even after refusing all food, he would rise and walk to the door when we pulled out the leashes as if he were going on yet another adventure. There was no excitement in his interest. Not like before. It was instinct and commitment to a routine that motivated him in those final days, and bless him for trying.

Now we are a pack of one. Our family feels small and while I could probably race out and get another dog today, it’s not the right time. We need space to honor Rubin. We need space to allow Oscar to figure out what it means to be an only dog. And we need space to figure out who we are as a one-dog family. We’ve spent a lot time reassuring Oscar, telling him how much we love him and how happy we are to have him in our lives. We walk a lot and meet up with our other dog 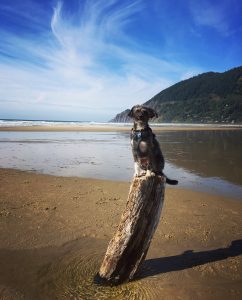 friends so Oscar has a chance to interact and on our walks, we stop and visit passersby.

But as big as Oscar’s personality is, the space Rubin occupied in our lives feels empty and huge. He always kept track of us. While Oscar would just sleep on the couch and wait for us to look like we were going somewhere exciting, Rubin would follow us around from kitchen to office, office to bedroom, bedroom to bathroom. His eyes were always on us. Now, I look for those eyes in the house. The weight of his presence tilted our awareness in his direction. The weight is still there, but his presence is much more elusive.

We are a one dog family. It’s been years since that was the case. I’m sure one day I’ll get used to it. One dog in the house, one dog in the car, one dog on walks. One dog to feed. One dog to care for. One dog sound asleep on our bed. Or perhaps it’s one dog, with two hovering nearby. Always a pack of three amigos. Always.