Water in any form

I soon learned, as a dog walker in Seattle, that rain gear was essential. Not just any rain gear, but rain gear that could handle torrential storms that pummeled you sideways, thick drizzly rain that was the most penetrating of all, and warm rain that caused so much sweat, the inside of your rain gear was wetter than the outside. I also learned the importance of waterproof shoes; solid, 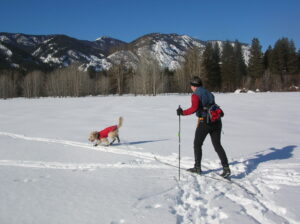 dependable, and truly waterproof shoes that were comfortable for the many miles traveled were a must.

Oh and more than one pair of everything. At the highpoint of my “career,” I had at least three of sets of everything – three pairs of rain pants, raincoats, rain hats, and waterproof shoes — so while one pair was drying, I could put on a fresh set and not be miserable. And if the work day was particularly long and wet, an extra set to keep me from getting cranky.

Rubin, my dog walking assistant, hated coats of any kind. He hated harnesses and sweaters in equal measure and god forbid you put booties on his paws. If he had his druthers, there’d be no harness, no leash, and no clothing of any kind. But this was the city and we were dog walkers, so he had to learn to adorn himself in all the stylish wardrobes I purchased for him. 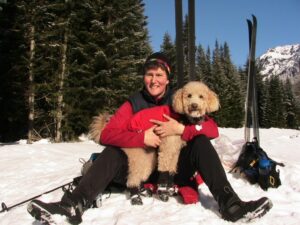 He didn’t mind getting wet. He never complained when the wind swirled the rain up from the ground at the same rate it plummeted from the skies. In fact, water in any form thrilled him and only once or twice in his life, did I ever see him give me a disapproving look regarding the weather. I remember one outing in particular toward the end of our work day when the rain came down so hard, my underwear was wet even under my best rain gear. He was soaked through to his skin and he shivered as I towel him off once we got home.

Otherwise, the boy loved water as rain, as snow, and most of all, as a place to swim. We taught him to swim at a very young age. When he was about three months old, we took him to Lake Washington, held out some treats as we lured him into the water, and after the second attempt,

he was all about swimming and splashing. Later, when I’d swim in the lake, I taught Rubin to swim with me, out to the buoy and back. To keep him safe, I fitted him with a life jacket, which, per his clothing disdain, he absolutely hated. Once we were out in the water though, he didn’t mind it at all. It gave him just enough buoyancy that he could see me over the waves.

When I landed a job at a warm-water therapy pool for dogs, Rubin was skeptical at first. I put on his life jacket, coaxed him into the pool, and once he realized he could play fetch in the warm water, he was thrilled from then on with every visit to whatever pool I worked at. Our dear friends, Doris and Steven, had a pool in their backyard and they welcomed any swimmers – human or canine. We’d pack up all our swimming gear on a hot summer day, head to their house, and Rubin would just 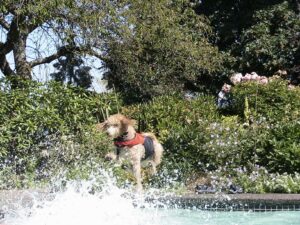 about climb out of his skin to get into that pool. Yes, he still hated the life vest I insisted he wear, but he forgot all about it once he got in the water. We swam for hours at that pool and even in his senior years, a trip to Doris and Steven’s house was a highlight of any day.

An extension of his joy of water was a trip to the beach. While we lived by Lake Washington for most of his life, a real beach trip for Rubin involved salt water. We took numerous trips to Manzanita where a client of ours allowed us to stay at her beautiful beach house. The Manzanita beach was flat, wide, and magnificently dog friendly. Rubin could hardly contain his joy every vacation in Manzanita and his joy grew exponentially when we moved in 2020 to Port Townsend where the beach was a short walk from our door. In the past two years,

we’ve been to the beaches around our home countless times and every visit, Rubin would reverse age, becoming a six or seven year old dog again, prancing and racing along the sand with the utmost glee. The extra excitement of the Port Townsend beaches was that he could be off leash and not have to wear any clothing, unless it was particularly windy and cold.

Ironically, when we moved to Port Townsend, Rubin had grown so accustomed to swimming in the fresh water of Lake Washington that he was always a bit shocked both by the temperature of the salt water, but also by the taste! He’d splash into the waves, a huge smile on his face, and then look at me as if to say, “Uh, how come this is so cold?” Then, out of habit, he’d take a drink and his face would pucker and scrunch when he realized it was salty. He’d try again and again until finally I had to intervene. Still, he loved the salt water beaches for their wide expanse of sandy, flat ground where he could run and roll and then splash into the waves. 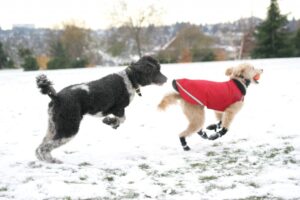 and coats and dreaded booties on his paws. The first time we took him cross-country skiing, he flicked off his boots in a matter of seconds. We lost two of them in the snow so we decided to just forgo the boots altogether and let him romp without them. Not a good idea as the snow clustered around curly hair on his feet and paws like pompoms. We didn’t know it until we got home, but the ice balls formed in between the pads on his feet and when he chewed at them, they took off skin along with the ice. He was hobbled for about a week and numerous times a day we had to smear salve onto the bottom of his feet to help him heal. Lesson learned.

From then on we always made him wear booties and one, and sometimes, two coats and/or sweaters. He threw a fit while we dressed him and then, once he was fully attired, he’d stand 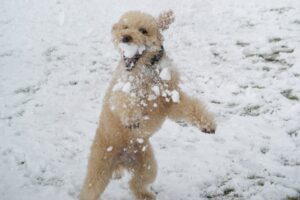 frozen, like moving his legs was an impossibility. The look on his face was the saddest, though we laughed uncontrollably at times watching his mournful, silent pleading to be “naked.” He was a tortured pup until we got him out into the snow and then the boots, the coats, the harness were soon forgotten. He’d run and play and follow us as we cross-country skied, thrilled to be in the outdoors on a snowy, cold day.

Water was Rubin’s element and even though baths involved water, he learned to endure his twice monthly bathing regime. I’d bathe him after a swim session at the pool, the pool business providing the perfect tub for the shampoo and rinse. When we moved to Port Townsend, our new house offered a walk-in shower and every other week, he willingly though begrudgingly walked in with me for his “spa” treatment. After a bath, he’d race around the house, just as he did on the beach or by the pool or the ski trails, thrilled to have yet another encounter with water.

Perhaps this is why Rubin’s decline felt sudden and slightly unexpected. I suppose, if I’m honest 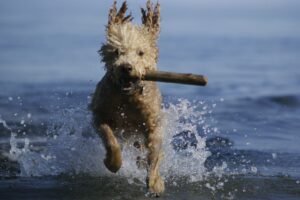 with myself, I knew he was fading. His walks had become mostly sniffing expeditions and while he loved his time on the beach, he was quite exhausted for the rest of the day after them. About three weeks before he passed, we headed to his favorite beach, just out of town. The sun was brilliant that day, but it was wintery cold and a blustery wind made the air chilly and fresh — just our kind of day. We walked the long trail to the tip of the spit and once he got to the water, he pranced and raced along the shore and rolled in the sand like a madman. We spent less than an hour on the beach and after a bath when we got home, Rubin slept soundly until the next day.

The same happened with the snow, which I’m thankful arrived during his last week of life. On Christmas Day, late in the afternoon, just as it was getting dark, the snow fell heavily and quickly. We were taking care of our friend’s two dogs, one of them a 5-month old puppy who had never 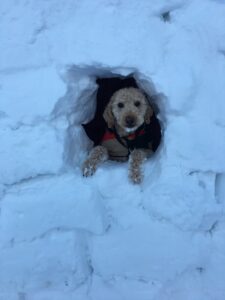 experienced snow. We let the dogs out and Chula, the puppy, raced around the yard in manic figure-8s. Rubin, who was pretty much blind and completely deaf, stood in the middle of the yard and did his best to keep track of the whipper-snapper and then suddenly started a game of chase. It was a senior game of chase — no great bursts of running or racing — but it was joyous and youthful and magnificent. I filmed the exchange, which was difficult to do in the dark, but it captured his pure delight of snow, the same delight we’d seen throughout his entire life.

We cried at the sight, which I guess was a sign that we knew his days were numbered. Watching him play, to rally the energy to old man chase the puppy made our hearts swell. The next day we took a mile walk in the freshly fallen snow and Rubin was thrilled to be spending more time in the cold and white. That was the day he stopped eating and four days later, after fluids and appetite stimulants and B12 shots and enormous amounts of coaxing to get him to eat something, anything, we made the fateful, necessary decision to say goodbye. 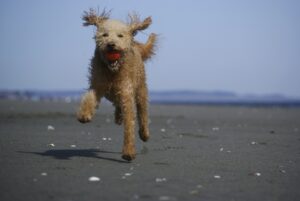 This is where my doubt comes in. Did we not give him enough time to recover? Did we push him a bit too hard by letting him play in the snow, frolic on the beach? But then I think, while the extra exertion of the snow may have contributed to his decline, would he have had it any other way? I’ve see so many dogs unable to walk at the end of their lives, laid flat out on their beds without an ounce of energy to even interact with people let alone sniff and play in the snow. Is that was we wanted for Rubin? I knew it wasn’t.

Until the final day, Rubin still tried to be alert and involved, but you could see it in his eyes even in the photos. He was exhausted. He was only here because he thought we wanted him to keep trying. Not eating for five days was such a big sign, now that I look back, but at the time, I just didn’t want the last beach trip to be the last or the last romp in the snow to be his final.

But it was and thankfully he got to do what he loved the most — being with water in all its many forms. In many ways, we couldn’t have asked for a better ending.