My mother and Rubin shared a lot in common. They both lived into their 90s (Rubin’s in dog 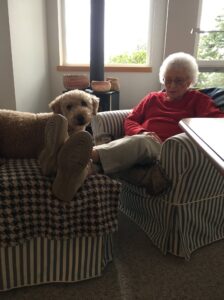 years, of course), they both loved to swim, and they had the same hair. We noticed this last detail when Ann and I drove my parents to Oregon for the annual Christmas holiday with my brother and his family. We’d take two cars because of the dogs (at one point three in the back seat) and the amount of food and gifts my mother always insisted on bringing. Ann would drive one car with one parent and I’d drive the other with the other parent, following each other for the 5 hour journey, which included a stop for lunch, where my father would always order a milkshake and a slice of pie.

At the lunch stop, we’d switch parents – mom would ride with Ann for the second half of the journey and dad would ride with me. We’d laugh because the first thing they’d ask us after the switch was, “What did mom say?” or “What did dad tell you?” making 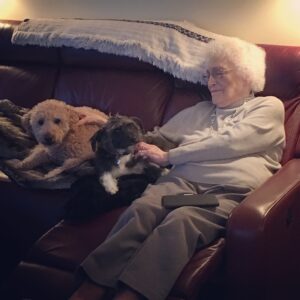 certain family secrets were not divulged. It was at one lunch stop that Ann pulled me aside and said, “At one point, Rubin was sitting up in between the seats and I swear, there was no difference in the shape of their heads or their hair.”

She was referring to my mother who, in her later years, let her hair go white and scheduled a routine five-week appointment to get it permed. Rubin, a labradoodle with more poodle than lab had the same “permed” look with the curls on his head, the same rounded shape of skull, and though his hair color was technically apricot, if the light was just right, it looked white. “I swear to you,” Ann explained further, “It was as if she had a twin!” 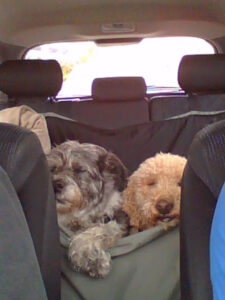 when we found a large mat of hair on Rubin’s head. I tried to comb it out, but it was gnarly. Hearing our frustration, mom came to the rescue with her leave-on detangler conditioner that she swore was the best product her hair dresser had ever recommended. We gave it a try and what do you know, it worked! The gnarly mat was gone in less than a minute.

I was lucky my parents liked dogs. When I moved away from teaching to dog walking and then pet sitting, I always had a number of dogs in tow when we visited. Some dogs even came with us when we made the twice a year journey to my brother’s in Oregon for Christmas and then again in the summertime. My father particularly loved dogs and when he wasn’t crippled with Parkinson’s, he’d often crawl on the floor to pet them.

My mother’s love for the dogs was less affectionate but still special. She enjoyed having them around and talked to them as if they were people, but if they got in the way, she’d grow a bit 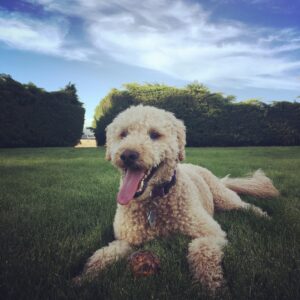 annoyed. Rubin learned to dance around her in the kitchen, for instance, but there were times when she insisted he “leave the premises” and give her a clear work space. In her later years, she was a bit more tolerant, partly because she didn’t work in the kitchen as much, and partly because they were always seeking her affection.

Rubin loved my parents. He loved going to Oregon to be with my brother, sister-in-law, and their two kids, his grandparents in tow. He also loved the long walks we’d take along the country roads where he’d bark at the farm animals and race up the fertile fields by my brother’s house. He played like a wild man on their 20 acres, supervised all the cooking in the kitchen, and then crashed on the couch curled up to one family member or the other. He tolerated the other dogs in the house — Hope, Ringo, and Kili (my niece’s dog) — but what he loved most was when we were all together — the whole extended family, dogs and people.

I know these memories will fade. I know they will morph and change and compress. I know that 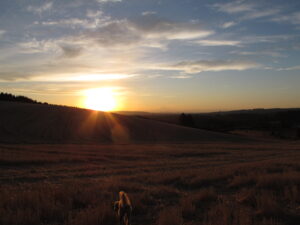 soon I will struggle to recall the sound of my mother’s laugh, the feel of Rubin’s curls under my fingers, or picture my father’s wry smile right after he tells yet another bad joke. Stories are what’s left —shaped by our faulty memories, triggered by countless photographs. Sometimes they are too much to hold but most times they are not enough. Grief is in the remembering but it’s also in the forgetting. I wish I’d taken more photographs, written down more of the memories, sat more quietly in each moment just to firmly imprint the recollection. Too soon so much will fade only briefly to bubble up unexpectedly in the future.  So now, I scan the photos a few more times looking for details that might be the glue I need to hold the memories for a bit longer.  And I grasp onto the stories as tightly as I can, afraid to let them go into the ether of the forgotten.