I want to tell you about Alexi…

In my 8+ years of small animal massage and swim therapy, I have met some absolutely 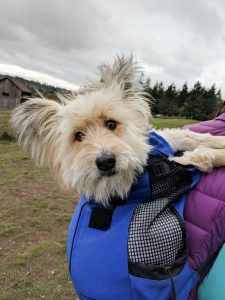 amazing dogs and their people. All of my clients have inspired me in some way, but I don’t think there’s a dog who’s touched me as deeply as Alexi.

While you can read about his full story here – Alexi’s GoFundMe— let me give you a brief synopsis. Alexi came to the United States in July of 2018 from Iran, where he was found in 2017 in an abandoned building. He could not walk. He could not move any of his four limbs and only used his neck and head in a limited fashion to pull himself short distances. He had lots of other physical issues, but suffice it to say, his inability to walk was not a good sign. After many vet visits and diagnostic tests, it was determined that the paralysis was due to damage of his cervical (neck) spine.

He was fostered by a lovely family who have committed to his rehabilitation full force bringing him in for swimming at SplashDog Spa, to the underwater treadmill and for physical therapy with the fine folks at Sound Rehab, to the amazing and miraculous Dr. Maggie Gillen at Quilceda Vet Clinic who uses her knowledge and skills as a traditional veterinarian, but also her vast knowledge of Traditional Chinese Medicine, osteopathy, and homeopathy to help Alexi regain movement. His foster family does physical therapy with him at home, they take him on amazing outings to stimulate his senses and interact with the world, and they love him and believe in him wholeheartedly. Committed is not a strong enough word to describe their compassion and dedication to this wonderful boy. 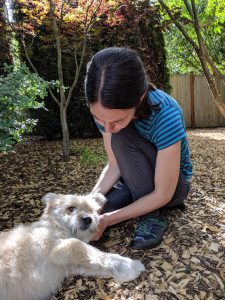 When I first met Alexi, he came to SplashDog to for a swim therapy session. I know…”Swim? This dog can’t even walk!” is everyone’s reaction so let me dispel a few misconceptions.

First, often dogs who have no use of  certain limbs do great in the pool. For instance, dogs who have paralyzed rear legs swim amazingly well with their front legs and get much needed exercise.  In the water, the dogs can be weightless and don’t have to struggle to “move,” they can pull themselves through the water (with assistance from a therapist), and not feel the dead weight of their hind legs.

In addition, as swim therapists and licensed massage therapists, we have “tricks” that can often help even paralyzed dogs get some movement in those effected legs (but more about that in another blog.)

Second, it’s not all about the swimming. As mentioned above, weightlessness can help many 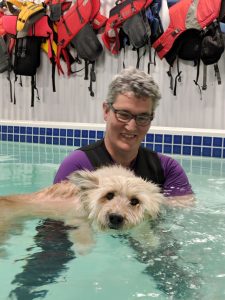 dogs with spinal issues. While floating, we can massage and stretch atrophied muscles, we can work on range of motion throughout the entire body, and we can help the dog develop strength in areas that the dog is unable to fully use. For instance, sometimes the abdominal muscles of a paralyzed dog are flaccid or poorly toned, and by stimulating those muscles while the dog floats in the water (with support from a life vest and/or a therapist), muscle tone can improve.

Perhaps my favorite activity in the pool, is to help a dog develop proprioception. Proprioception is our sense of where our body’s limbs are in space. Proprioception comes from the nervous system as a whole and not a specific organ of the body. We get input from sensory receptors distinct from tactile receptors — nerves from inside the body rather than on the surface — that tell us our hand is above our head or that we are kicking a ball.  For example, without proprioception drivers would be unable to keep their eyes on the road while driving, as they would need to pay attention to the position of their arms and legs while working the pedals and steering wheel.

Dogs who are paralyzed, lose that proprioception, but it’s not necessarily lost forever. Through different exercises, the brain and body can be “reactivated,” or better yet, the nervous system can be reawakened to develop those proprioceptors. Here is a video of his foster mom working on developing this proprioception at home, trying to get him to stand on his four legs, to be aware that he has four legs. This was early on in his therapy and as you can see, not very strong (yet!).

Sometimes the damage a dogs suffers is too great or is chronic (has been a problem for a long, long time) and it’s impossible to reawaken anything. But sometimes, through dedication, daily exercise, intense therapies, and downright persistence, the body can rebuild. It’s slow going with many plateaus, but it can happen.

When I first met Alexi and saw the kind of damage he sustained, to be honest, I didn’t have much hope. His foster mom carried him and while he was alert and engaged, he could barely hold his neck up for more than 15-20 seconds. In the water the first time, he was clearly nervous, but if Alexi is anything he is extremely trusting. He wore a life jacket and I supported his neck on my arm, but still, he was uncertain and nervous. He was protective, as was to be expected given his history with his muscles and organs rigid in anticipation of the outside world causing him harm. 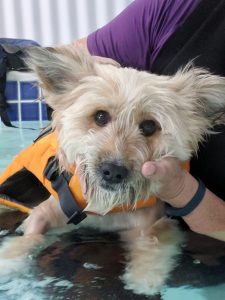 To move anywhere, Alexi had learned to use his head/neck like a clam uses it’s arm — reaches out and then pulls himself forward. The progress is minimal, but it’s also innovative as he must have learned to “move” that way while lying in that abandoned building (for Dog knows how long), the “flight” instinct strong within him. In the pool, of course, that movement didn’t serve him at all, but he still tried to move, pressing his head against my arm hoping to move forward.

The work in the pool is focused on getting his back legs to respond, again using various techniques, and loosening up his incredibly stiff and rigid front arms and neck. We practice lifting and turning his head, engaging muscles that he is just learning to use, and increasing his range of motion — moving his head side to side, up and down, massaging those neck muscles that were, in the beginning, as hard as concrete.

And he stretches…manually with my arms helping to uncurl his rounded body, extend his front and back legs, and bending his body from side to side.

During these sessions, we discover new things. For instance, once when I was stretching his body, fully extending and stretching him, his back legs moved forward and “climbed” over my arm. Now his foster mom practices this in his daily exercises and he is getting better and better at it.

Over the months, his rigidity has decreased especially in his neck and front legs. His mom will send me texts of his front leg flopping, relaxed and loose not stiff like a board. He can hold his head up a lot longer now and has much better range of motion — looking around for treats to eat and for squirrels to bark at.

And then there are times when he relaxes, fully gives in and trusts, knowing that his “team” is really there to help him. I have felt this the most, not in the pool, but when I’ve traveled to Dr. Maggie’s and worked with her using osteopathic techniques to that help relax, awaken, and 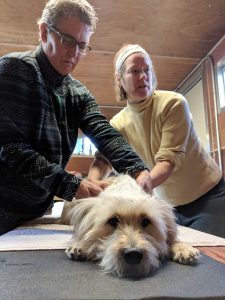 stimulate his body in in a deep and powerful way. While Dr. Maggie and I have only worked together with him twice, his progress during those sessions was palpable. We could see, we could feel his body relax in a way it doesn’t in the pool. It was as if we opened small doors that allowed some of the other modalities to access his trauma on a deeper level and heal it in a way they couldn’t when he was in his protective mode.

In the underwater treadmill, he’s using his back leg consistently. Slowly, they are gaining strength. But he gets frustrated at times, and that’s probably when he tugs at my heartstrings the most. You can see the frustration build in his eyes as his determination to get the treat is thwarted by a body that, while improving, still has a long way to go. Food is a great motivator and, until recently, would only move in his cart if there was food in front of him.

But then, just last night, after a swim session, his foster mom reported that, for the first time, Alexi “walked” in his cart for almost 12 feet, using his back legs more than she’d ever seen. And there was NO FOOD INVOLVED! This was fabulous news, but it’s hard to know if it was a one-time event or if something had actually clicked and he now knew that he could propel himself with his own back legs.

And what do you know…I received this video just today.

Can you see it? Can you see how he’s moving those back legs, actually planting his feet and pushing? I cannot begin to tell you how phenomenal this is — to make this much progress in 6 months?

Yes, there’s still a great deal of work to do…to get those front legs to have as much movement as his back legs, but this progress is definitely work celebrating!

In addition to this outstanding update, Alexi’s protective mode is slowly melting away and every time I see a photo of him on Instagram out and about with his sister, Gypsy or on a 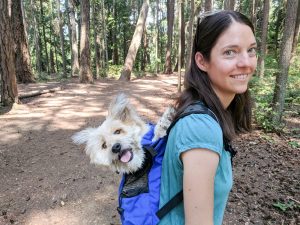 hike in his backpack with his family, I can see it in his eyes — he is healing from the inside out.

I have asked, a few times in my career, people to donate to a cause every now and then. I’m not big on asking, but when certain animals or causes touch me, I feel compelled. I definitely feel compelled with Alexi. Alexi’s therapies aren’t cheap and while many of us have donated time and therapies, Alexi’s road to recovery is going to be long. His foster family is definitely committed to helping Alexi live the best possible life, surrounded by love and adventure and all things good, and they are even more committed to his therapy at home, at the pool, at the rehab center, and the vet clinic. 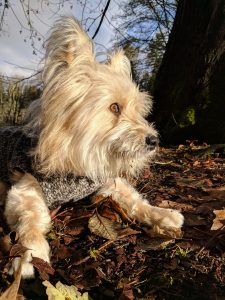 So if you feel able and have some extra money to donate, I humbly ask on Alexi’s behalf. He’s a special guy with a special story. You can read more about him and donate to his treatments here: Alexi’s GoFundMe Page

I will also update his progress on this blog from time to time so check in when you can. And thanks for sending this little guy your love, your healing thoughts, and if you can, a little financial help (and thank you to those who already have!).