Do you believe in magic? 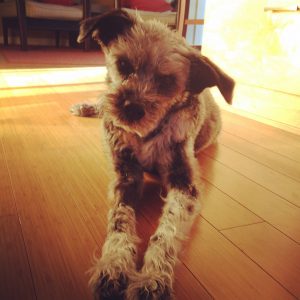 A little over two years ago, my pal Dezi came to live with us. I thought it was a temporary thing, but I soon realized, perhaps even before Dezi did, that it was permanent. No one asked me if this would be okay because I think they just assumed that I would understand and I suppose on some level I did. Dezi needed a home and he was most comfortable in ours so here he landed and here he will stay.

In April, Dezi was diagnosed with a very large tumor in his middle ear. This made us all sad because, given his age (14.5), even the surgeon advised against surgery. We have no idea how fast the tumor is growing and while the tests for cancer came back inconclusive, it’s still a mass growing in his ear making him unsteady on his already elderly legs. He has quite a head tilt, 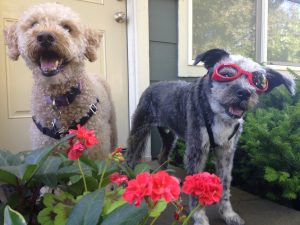 walks a bit like a drunken sailor, and at times falls over, like when he shakes his head or is moving a bit too fast.

We thought his prognosis wasn’t very good and so we prepared ourselves. But here we are, mid-June and Dezi is doing ok. He has his bad days– about one a week — but the majority of his days are good — slow and steady. We know that eventually we will need to say goodbye, but today he is here with us — happy, content, and still enjoying life.

And this makes me happy because despite my hesitancy, I love him, I’m happy he’s my brother, and I hope he can stay with us a long as he can.

And then this happened…

My Aunt Patti sent a photo from her vacation of a young pup who showed up at her hotel. When we first saw the photo we all gasped — it was Dezi’s doppleganger! We shared the photo with our good friend, Randi, who, without hesitation said, “This is a sign. He needs to come here!”

And so began the wheels of destiny for young Blue…that’s what Patti named him, little Blue…a street dog from southern lands. He was welcomed into the hotel, loved by Patti and her sisters, and taken to the vet for shots, neutering, and a physical exam. He has some medical issues, but they are all being treated and once all the paperwork was in order, he boarded a plane with Patti and headed north. 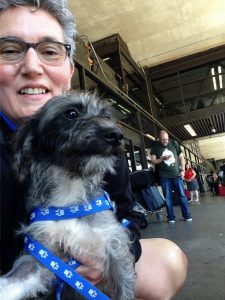 I have yet to meet him, but Gretchen picked him up at the airport with Randi and both of them fell madly in love. His first stop was to Classy Canines for training and assessment. That’s where he is now and according to the trainer, he’s doing remarkably well — getting along with other dogs, cats, kids, etc.

But what’s next for Blue? This is where I’m a bit worried. First,

I can tell, though, that this Blue is a special dog. Patti fell head over heels in love with him, but is unable to keep him. Gretchen fell head over heels too, but she knows that both Ann and I need to be on board before she takes on any other dog. And Randi loves him too. 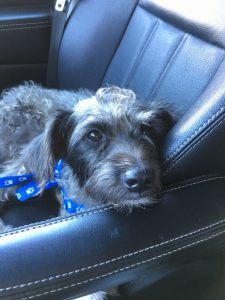 And so does the trainer.

Luckily, there are a few people we know who are interested…in fact, they are lining up, but we are waiting until Blue is ready.

In the meantime, all of this has given me pause (paws). In fact, I’ve been thinking a lot about magic, which I know may sound odd, but somehow, the more I contemplate Dezi’s inevitable passing and Blue’s arrival, the more the topic of magic crosses my mind.

There are lots of definitions for the word magic — a lot having to do with sleight of hand and fooling people. This is not the kind of magic I have been thinking about. The definition I like has to do with mystery — the beauty of the unexplained. Like the magic of seeing a beautiful sunrise or the color of the leaves as they turn in Autumn or the sight of beef liver cookies added onto your daily meal.

I can see now that Dezi’s coming to live with us, while a result of tragic events, has been a beautiful experience for all of us. He has taught me so much about myself, about love, about patience (an important lesson for me), and about acceptance.

Then Blue shows up on my favorite Aunt’s doorstep and while I am a little nervous about what it all means, I realize there may be some unexplained magic in this event. I’m not sure what that might be, but when I look at Blue and those big ears, when I realize how much he looks like Dezi I think I might allow myself to believe in magic.