Seems like everywhere I turn, people are telling me their resolutions. I’ve made them every year of 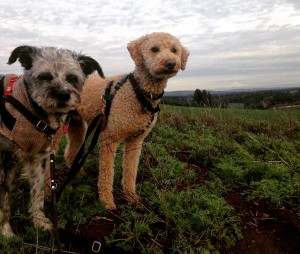 my 8.9 years in life, but this year I somehow forgot. Perhaps this is fortuitous because I’ve decided I’m not going to write resolutions anymore. Instead, I’m going to reflect on lessons learned.

Just as I was going to review my whole life in 2015, two lessons presented themselves in the first few weeks of 2016.

As you may remember from my last post, Gretchen rescued an orange tabby cat while we were in Oregon for the holidays. We named him Rudy (for Rudolph the red-nosed guy) and did a lot of communicating with each other (could one of us take him?) and with a wonderful rescue organization — Cat’s Cradle Rescue. If you recall, Rudy ended up at the Humane Society Shelter because he had a microchip and so the law required a good-faith effort to find Rudy’s family.

Meanwhile, we made plans (with the help of our good friend, Randi at Natural Pet Pantry) to drive back down toward Rudy, meet up with the Cat’s Cradle folks, and bring Rudy back here to a cat sanctuary.

We got a call from Cat’s Cradle that they had been informed that Rudy’s family was headed to the shelter to pick him up!

At first, we were thrilled — Rudy is going home!

But then we hesitated. Wait…where had this family been the whole time  he’d been in the shelter? Was he going home to a good family or to the family who had tried to get rid of him initially?

I have had this lesson raise it’s head before, but I guess I have yet to fully digest it. We may never know how Rudy ended up in the walnut grove blind, sick, wet, and hungry. We can create endless scenarios — some with good intentions (he ran away?) and some awful (he was dumped?) — but in 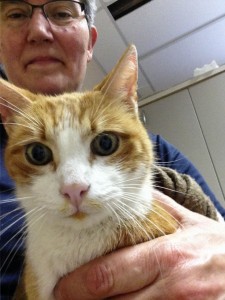 the end, we may never find out what happened.

So we have decided to assume the best of intentions. Luckily we found Rudy. Provided him food, water, shelter, and love until he could be reunited with his family who loves him and who were desperate to get him back home where he belongs.

It’s hard to hold that thought — my mind wanders back to why he was lost, did his family really want him, how long had he been in the cold, wet field, will they take care of him now that they have him back, is he in the best place possible? — but it’s the good thoughts I must hold because I really have no other choice. I can live my life in that negative space or I can live my life in a more positive place.

The latter makes me breathe a lot easier than the former.

Lesson learned? Hard to know, but for now, I’m practicing holding that positive space, those positive thoughts and doing my best to assume best intentions.

2. Be Careful Whose Business you Stick your Nose In…

I have to tell this lesson backwards. This last weekend, I ended up in the Emergency Room. Don’t 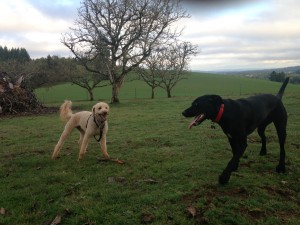 worry, I’m on the mend, but my moms were worried. So was I. I developed a really ugly sore on the tip of my ear. I had to wear the cone of shame and that was perhaps the most uncomfortable thing I’ve ever done in my life!

But the ear wasn’t getting better and soon the same kind of sore showed up on my other ear, at the top this time and not the tip. And then, literally overnight, those sores showed up on my muzzle — both sides — and I was going nuts with the itching. It was unbearable.

By the time Gretchen got home from work at the pool on Sunday, those sores were starting to appear on my shoulders.

The first thought was mites so they treated me for that, but things kept getting worse. When Gretchen saw me Sunday night, she finally made the decision to rush me to the ER to see if they could figure out what it was.

Let me digress a moment — Emergency Rooms are placing of great healing but also of great sadness. We saw some very sad cases on Sunday and it made us grateful that such wonderful people work at Emerald City Emergency Clinic. And we hope all the animals we saw Sunday night are in a better place than they were. 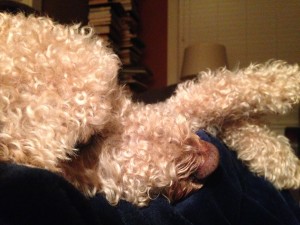 Now back to the story…

The vet on call was in surgery so I had to hang out for about 3 hours before they could diagnose me. Don’t worry — I didn’t have to sit there suffering. They gave me a low level anti-histamine and some pain meds so I felt better.

And then they scraped the sores on my nose.

I was a remarkably good boy. Remarkably. Much to everyone’s surprise, even my own.

What they found out is that I had a sore on the tip of my ear got infected and somehow exposed to staph. Then, as staph will do, it spread rapidly and painfully across my face and eventually down my back.

But how did I get exposed to staph?

Remember when I was in Oregon visiting my family? Well, my Uncle Paul and my Aunt Patti live on a wonderful hillside surrounded by walnut groves and horse pastures.

When we went for walks, we walked through the walnut groves (where we found Rudy) and we also walked and played in the horse pastures.

I won’t lie. It was fun. I got to play with my cousins — Ringo and Kili — and I had my first taste of 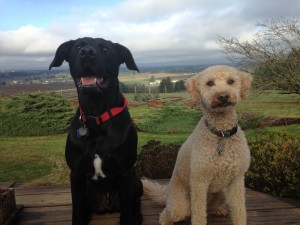 Yep…apples of it were everywhere and when I saw Kili eating it, I thought I should give it a try. You might cringe, but that stuff is scrumptious!

Apparently, I had an open sore on the tip of my ear (I think I got nipped while playing with Kili…but don’t worry Kili, it’s not your fault) and when I buried my head in the piles and delicious horse dung, I exposed it to unhealthy bacteria.

Not only that, but I learned that horse poo, while a tasty treat in my book, contains some other stuff, not so good for me. Horse owners often used Ivermectin to deworm their animals. Ivermectin weakens the immune system and so while digesting the good stuff (the horse apples), I was also taking in pesticides that lowered my immune system. 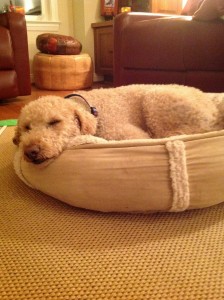 Staph doesn’t show up right away, so that’s why it took a bit of time to develop, but once it emerged, it spread quickly and painfully.

I won’t lie — I still feel a bit crummy but the vet said that’s normal. I will feel not quite myself until the infection is gone. My face and ears look lots better, but I don’t have the same energy. So I’m on an easy-does-it routine with limited walks and no swimming (which makes me very sad). Still, every day I am feeling better and I have learned a valuable lesson — don’t stick your nose in other’s business — namely horse droppings!

Not sure how I like reflecting on lessons learned versus resolutions, but I’ll let you know how it goes in the coming weeks and months. Hopefully there won’t be too many more lessons to learn!