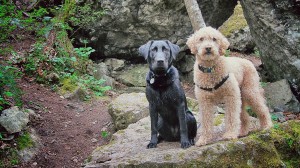 Yesterday we went for a walk on one of my favorite trails at Cougar Mountain. Yes, there are cougars and bears there though I’ve never seen any. Gretchen claims she heard a cougar once (before me), but I’m skeptical. Still, there are signs warning of recent sightings and detailed instructions on what to do if you spot a bear or a cougar. Of course, I think the cougar sign is very funny because, need I remind you, cougars are cats and cats aren’t like bears or dogs — they rarely warn you they are on or near the trail. Rather, they pounce usually from behind and with so much stealth, they should be studied by the war 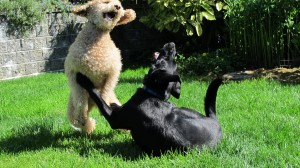 But I digress because the real danger, as we found out yesterday, is not a wild animal hiding in the under brush. The real danger is a water trough.

Let me back up a bit. As many of you may know, Scout — a 6 1/2 month old black lab — has been our most recent boarder. It’s taken me a bit of time, but once I established my boundaries, Scout and I have become fast friends. We go on walks together, we wrestle in the backyard together, and spend time 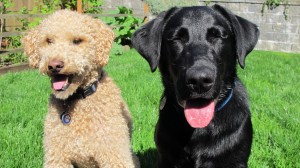 stretched out for our naps together (not touching, mind you, though Scout certainly tries!). Scout, being such a youngster, has very little impulse control. Apparently I was the same way when I was her age, though I have absolutely no recollection of that kind of behavior. And when it comes to any body of water — stream, lake, or puddle — any semblance of impulse control Scout might be developing, is nonexistent.

So yesterday, as we walked the wooded trails of Cougar Mountain, Scout dove into the creeks and streams, bounded through the puddles, and plopped herself down in the pools that collected along the side of the trail. She was in heaven and I have to admit, I chuckled at her antics. There is nothing like the 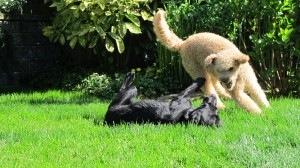 joy of a puppy uninhibited.

Cougar Mountain is a place where locals take their horses and go on trail rides. We see them on occasion and I’ve learned to ignore them when they come down the trail, but I don’t think Scout has ever met a horse and therefore she was a bit taken aback (to put it mildly) when two very large horses came toward us, their riders sitting relaxed upon their backs. Scout barked, which in turn, made me bark, but those horses had been around the block (or the trail as it were) and didn’t even twitch an ear. They just moseyed along while Scout tucked her tail, pulled back her ears, and did whatever she could to get away from those enormous beings who smelled funny. 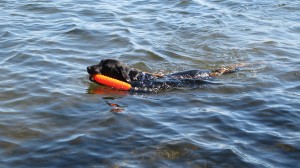 It took a bit of time to get her out of her fear and focused back on the walk, but the other joy of puppies is that they have a very short memory. Still, the smell of horses was everywhere and we both put our noses to the ground reading the scents of the “wild” beasts. Since I’m really good off leash (I come when called), I got to be off leash. Not so with Scout, though. She’s still learning to come when called and while she’s pretty okay with it, when there are distractions, she often fails at her recalls miserably. So Scout had to wear what is called a long line — a 50 foot lead that trails 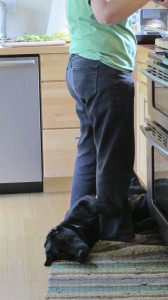 behind her or in this instance, Gretchen holds onto while Scout raced around smelling the blissful wilderness.

At one point on the trail, I turned to Gretchen and said, “So seeing has how Scout LOVES water, what do you think she’s going to do when she gets to the horse water trough down by the creek?”

Gretchen smiled. I smiled back and when we got to the creek we both waited in anticipation. Scout didn’t notice the water trough at all. Distracted by the flowing creek (we’ve 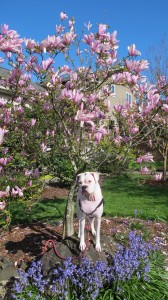 had rain of late), she dove right in racing up and down the stream, biting the water, and bowing down with her butt in the air inviting me to play with her. I raced around too knowing full well that her leash prevented her from ever really catching me, but still, we had a good time.

After playing for a bit, Gretchen decided we needed to get back on the trail and head home (a full day awaited us!) and as we left the stream and stepped onto the trail, Scout saw the water trough. In the blink of an eye, she did what we both expected she would — raced to the trough, leapt straight up, and landed belly-flop-style in the trough. Unlike the puddles and pools and creeks and streams, the bottom of the trough was about 3 feet down and as quickly as Scout jumped over the edge, she was completely submerged, sinking like a black stone.

Gretchen and I both gasped and before we could exhale, Scout popped straight up and in a single leap, flew out of the trough like a trout snapping at a fisher’s hook. Surprised, Scout shook off the water and looked at us like somehow we planned it all. Of course, she was smiling the whole time and when she saw us laughing, she ran over and shook out more water on both of us. 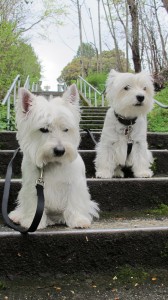 And boy did she stink! Like horse water and mud and so, when we got back, Scout got a bath, which did not make her happy at all.

All night long I’ve been thinking about the submersion. I’ve laughed a lot about it, but it’s also made me realize how life often offers up similar moments of submersion — times when we are surprised by how overwhelmed we are by life. It’s been like that for quite awhile and the past few weeks have offered us a new kind of submersion. Both my moms have been sick, I’ve had a belly ache (feeling much better now), and all sorts of things happened in our lives 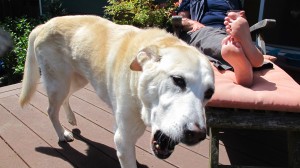 that shifted it dramatically. I don’t need to explain it all, but but suffice it to say, there are times when we have found ourselves under water and completely surprised by it.

But even with the submersion, there are parts of our lives that are still grounded — familiar trails and landmarks that have kept us stable and moving forward. Chief among them are our faithful and steadfast dog friends (and human friends, too) all of whom got numerous outings this week and most of whom, though not all, got to meet Scout. I should tell you that Scout greets other dogs much like she greets a body of water — full force and with sheer pleasure — and while most dogs are okay with this, some aren’t. Still, Scout has a way of charming even the most snarly (namely me) and so I enjoyed introducing her to my pals.

First, the dogs who didn’t get to meet Scout were Henri, Bella, Rosie, Tyson, Carter, Kali, and Theo. For some, it was by choice. Rosie, for instance, is learning to be in the 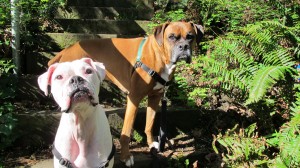 world without overreacting. Scout is the kind of dog who would make Rosie overreact. Of course, Scout would have no idea she’d spurred on such behavior, but Gretchen and I thought it best if Scout not meet Rosie, which in turn meant that she didn’t get to meet Tyson. I think Tyson would have really liked Rosie, but with only so many hours in the day, it was hard to find the time. 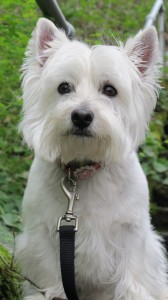 Henri and Bella we generally walk two times a week, but not this week as they both had dates with the vet and the breeder so we only saw them on Monday. While Scout would have most likely enjoyed to the Westies, which we planned on the second walk, since the second walk didn’t happen, Henri and Bella will just have to wait until the next Scout visit to be introduced. 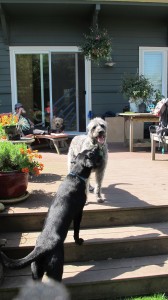 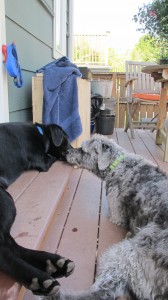 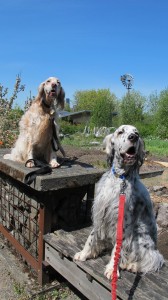 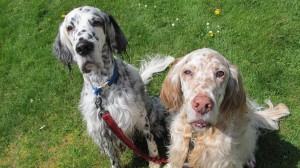 Theo is another do who would have loved to meet Scout though I think she would have been slightly nervous at first. That’s how 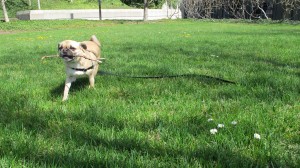 Theo was with us (Monty and me), but now Theo loves it when we show up for a walk. This week, though, I wasn’t feeling so great on Wednesday so Monty took over as the dog dog walker and got to spend time with Theo, which they both enjoyed immensely!

Carter and Kali are a handful in many respects and just walking the two of them without me can be a challenge. With Carter’s need to check out everything all at once (and his similar tendency to not have much impulse control) and Kali’s hesitance with things that move too quickly (name Scout!), I advised Gretchen that perhaps it wasn’t the best idea (especially if she wanted to keep her shoulders in their sockets) to walk the three of them together. She agreed. 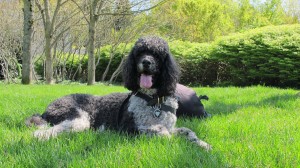 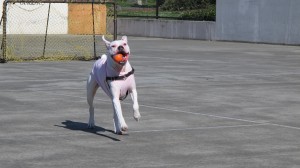 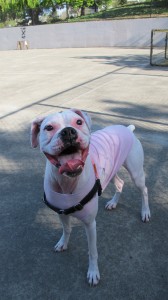 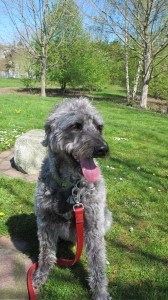 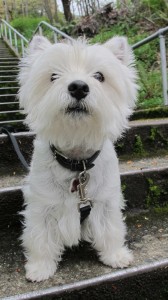 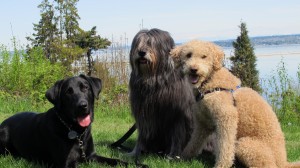 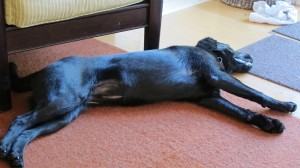 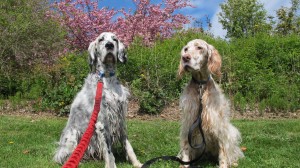 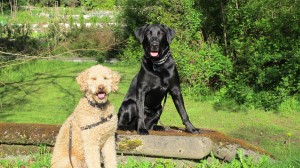 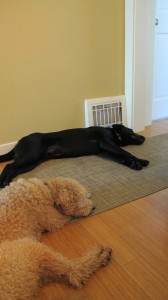 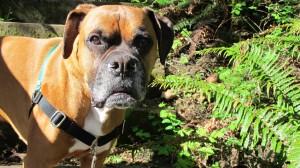 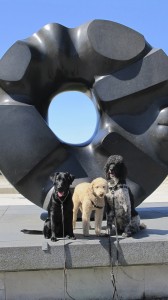 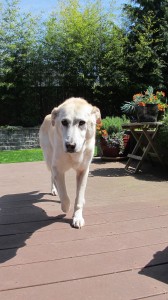 But Scout got to meet everyone else and that everyone else included Quillette who, I might add, isn’t that fond of puppies. Being one of the older dogs we watch, Q can be grumpy…grumpier than me, in fact. Still, it worked out that Q and Scout met and got along okay. Scout just had to give Q a wide wide berth and if she got to close, Quillette just snarled and snapped and Scout backed off.

Scout loved meeting Monty and Mr. Tolerant did a great job tolerating Ms. Busy Body. Uncle Monty is a name well earned as he knows when to play and when to scold and is judicious with both ends of the spectrum.

Roux was a bit taken aback when Scout showed up at her door, but after an initial growl and bark, the two wiggled their bottoms down the street together like long lost friends! Of course, Gretchen had a hard time getting a photo of them together because they both wanted to play with each other when given any sort of free time.

And Scout met Woobie as well. Woobie is perhaps the most tolerant dog we walk, but even she had to give Scout a warning nip to tell her to back off her enthusiasm. Scout listened and then looked at Woobie with adoration for the rest of our time together.

Submersion has been the theme of the week, I guess. Scout was immersed in our lives, splashing around with our friends and making waves with a few others. She goes home on Monday (tomorrow) and I’ll admit, I’m going to miss her. Well, I’ll miss her after I submerge myself in a very long nap!