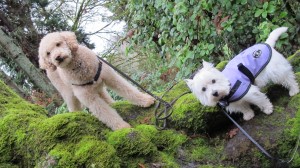 I’m not that kind of dog…

When people see me on the street they get all giddy. “He’s so adorable!!!!” they squeal in high pitched voices and then they get all wiggly like I’m supposed to imitate them and start being all sugar and spice and everything nice.

Instead, when approached by such enthusiasts, I generally (though not always) BARK (in capital letters because I bark loudly).

I look like a stuffed animal purchased at Walmart, but I am not that kind of dog. I look like the kind of dog you’d find in children’s bed time stories, curled 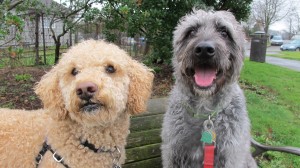 up sweetly at the foot of the bed, but I am not that kind of dog.

And it’s not just people. Sometimes other dogs do the same thing running up to me like we’re long lost litter mates and they wiggle and wag and paw at me and in response…I BARK. 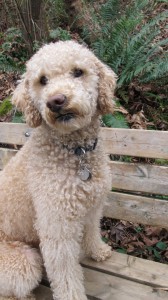 I look like I’m the kind of dog who’s all friendly and nice, but I am not that kind of dog.

And this past week, we took care of Tyson and Rosie and while Tyson knows me, Rosie is still learning. This is what she had to learn: I am curled up napping in my favorite donut bed and Rosie is doing her best to curl up in their with me. 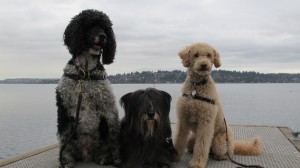 I’m beginning to think I was born in the wrong body…a trans breed if you’ll allow. I need a body like a Rottweiler or a German Shepherd or even like my friend, Paige, a Doberman. I need a dog body with a negative stereotype (not anything like what my friend Paige is really like or my German Shepherd friend, Ben…they are sweet), but what I need is to be in a body of dog with a reputation…the kind of reputation that makes people cross the street or point and say, “What a beautiful dog. Does he bite?”

I wish I were that kind of dog.

Okay, not really, but I wish I commanded a bit more respect or that people could at least read the signals I’m sending so loudly and clearly…I AM NOT THAT KIND OF DOG!

Rosie, at least, listened when I told her “Grrrr, no you cannot sleep in this bed with me.” She backed off and went to sleep in the other bed — no muss, no fuss. 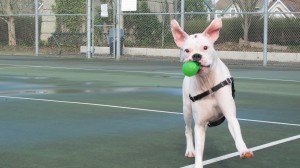 When Henri and Bella stayed with us, Bella understood me and just kept her distance. Henry, on the other hand, wanted to be in my business every minute 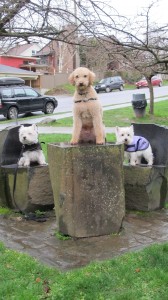 of every day and it took some growling to get him to understand that not every dog (at least not THIS dog) likes to have their private parts sniffed all the time.

Which is another of my oddities — when greeting another dog, I do not like the traditional sniff to my bum or spigot like most dogs do. And I do not, unless I know them very well, sniff their privates either!

Gretchen points out to me often that I am not like most dogs in many regards. Mealtime for one. When our friends and boarders stay with us, I marvel at how quickly and enthusiastically they eat. They gobble down their food like someone is trying to take it away from them, like they’ll never see another meal in their lives. If, while Gretchen or Ann are cooking, something drops on the floor — like a carrot or a slice of barbequed chicken — I just look at my  moms and say, “Hey, you dropped something.” Every other dog I know races over and vacuums up the crumb and/or morsel like it was food gold. I am astonished by their lightning speed and their willingness to eat something they aren’t really sure what it is. 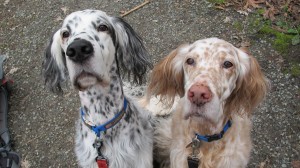 I take my time while eating and sometimes, if the mood isn’t just right or there’s too much hurried energy in the house, I won’t eat at all. Sure there are times when I eat more voraciously than others, but even the word “voracious” is not really the right word. Let’s just say that I eat with more interest, but it still takes me a good 10-15 minutes to really finish a bowl of food…if I finish it at all.

Yes, I leave behind food in my bowl, which my canine friends find astonishing.

Monty, for one, hovers over me smacking his lips. And yes, there are times when I growl at him. He looks at me and says, “What, dude? It just smells really good. Why aren’t you eating it?”

Because Monty…I AM NOT THAT KIND OF DOG. 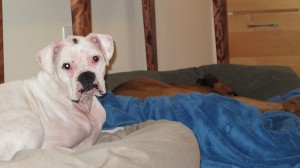 Okay, I am a lot like other dogs in some regards. I love to play. I love to romp around with my friends, make a lot of noise, be chased, played hide and seek, and just be a wild boy when a wild hair bends my way…

…and a I love to go for long long walks with my friends and watch the ducks from the dock (making it difficult for Gretchen to take my photograph!) and still be obedient when I am told to STAY.

I like to sleep on the human bed and lie between my moms on the couch. I love it when Gretchen practices her massage and acupressure on me or when friends come over and decide to give me a belly rub or play with my ears. 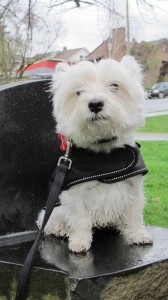 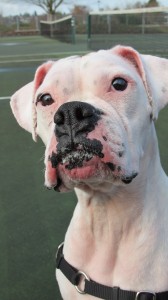 If Gretchen is making pasta (from scratch) I’ll lick the crumbling pasta dough off the floor (that falls down from the pasta machine) though true, I won’t eat much else off the floor though I do like Parmesan cheese when it falls.

…but in general I am not the kind of dog you think of when you see my curls and my adorable (albeit crooked) face. I am unique, but then again, so are all my friends really.

Monty is unique because he treats everyone like they are his long lost friend and greets them all with the same happy prance and wagging plume of a poodle tail. And he is unique in that he likes to play as roughly as I do! Click on the link below to see us in action!

Monty: My Kind of Dog!

Rosie, I’m learning, is unique in that she’s struggling a bit with containing her excitement, which sometimes bubbles up into fits of barking (especially on a leash).

Tyson is unique because he’s uber-sensitive and still has a hard time being left alone unless everything is just right. 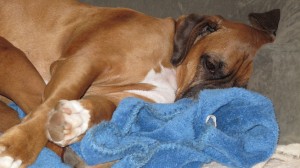 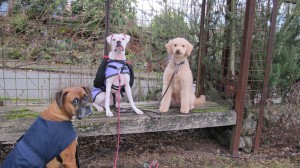 Carter is unique in more ways than I can count!

Kali is unique in that she has a memory like an elephant and has a hard time letting certain things go, especially those things that scare her. 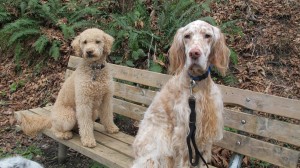 Henry is unique because he’s afraid of heights (which we found out when we tried to take a photo of him on top of garden wall…he shook the whole time, but I kind of get that…I’m a bit scared of heights myself). 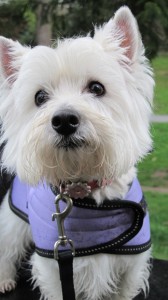 Bella’s uniqueness is a tough one for me. I like her because she leaves me alone and she wants to chase cats and squirrels as much as I do. I suppose she’s unique in that she’s very demanding, perhaps the most demanding dog I know, but somehow what she demands is never in competition with what I’m demanding so it’s hard for me to see that quality as unique. I see it more as simpatico!

Woobie’s unique qualities are beyond measure. She looks unique..very few other dogs I know look like her…and she has a very unique personality. She is devoted to her family, flexible and forgiving. She never gets in trouble (at least not when we’re together) and she has a calming effect on me that most dogs don’t. Even her name is unique. I mean, how many other dogs do you know are named Woobie? 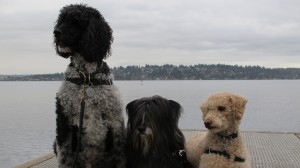 So when I really think about it, none of us is THAT KIND OF DOG…we all have our quirks and oddities it’s just that mine don’t jive with my looks. I am a Rottweiler stuck in a Labradoodle body and as much as I’d like my outward appearance to match my inner dog, they don’t have that kind of surgery available (at least not yet).

For now, then, I must learn to live with the split personality and remind folks (and dogs) as often as I can that I am not the dog they think I am.