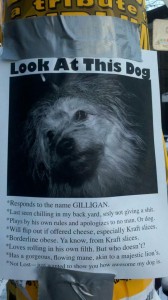 Look At This Dog

Look At This Dog

*Responds to the name Gilligan

*Last seen chilling in my back yard, srsly not giving a sh*#

*Plays by his own rules and apologizes to no man. Or dog.

*Will flip out if offered cheese, especially Kraft slices.

*Loves rolling in his own filth. But who doesn’t?

*Has a gorgeous, flowing mane, akin to a majestic lion’s.

*Not Lost – just wanted to show you how awesome my dog is.

Yes, I laughed out loud. So did Gretchen. We see Lost Dogs signs all the time and we keep an alert eye open for the missing. We’ve never found anyone and while that makes me sad, when I read this posting, I chuckled so hard my curls bounced. What a great family this dog lives with– to be so loved that they post signs all over telling everyone how lucky they are to live with such a silly, sweet dog.

So it got me to thinking — if I were to post signs of my dog-friends, what would I say? What do I need you to know in eight bullet points or less?

Great idea for a blog, Rubin.

Thanks, Gretchen. I thought so too, but I think I’ll need your help.

Seriously? I think you know your friends better than I do.

Maybe, but do chime in if you feel like I’m way off base or you have something to add.

Okay, will do. Who shall we start with? 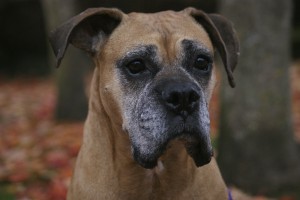 *Last seen poking her brother, Tyson (see below), with her nose, egging him onto play. (I’m not going to use any swear words, okay? Sounds like a plan.)

*Lives to chase cats though she rarely gets an opportunity, though trust me, she’s tried.

*Is so treat driven that she’ll do anything to receive a morsel (except if a cat is involved…then all bets are off).

*She’s built like a tank, but is amazingly flexible. She can bend herself in half in either direction and has a break-dancing spin move that is the envy of the boys in our ‘hood

*Takes 15 minutes to walk 3 blocks partly because she likes to pee on everything, but mostly because her nose is working over time and she knows that every leaf, blade of grass, and tree requires that she catalog its existence.

*Is gold like honey with sprinkles of white around her jowls. And you can’t miss her because she walks like she’s doing a jig.

*Not Lost — In fact, I doubt she would know how to get lost since she’s not only attached to her brother, Tyson, but adores her family so much she’d never leave their sides (well, unless a cat races by then she might have a chance of getting lost).

Perfect! I couldn’t have said it better myself!

*Responds to the name Tyson, Ty-Ty, or Chicken Nugget (you know, like Tyson’s chicken nuggets?) 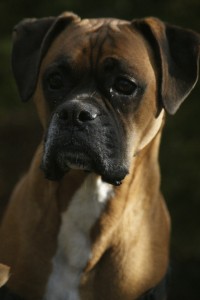 *Last seen with his head in the toy box searching for the hedgehog that squeaks while his sister, Rosie, punches him with her nose.

*Lives to protect his older sister, Rosie. He has often defended her honor and has the scars to prove it.

*While he enjoys normal dog treats and snacks, often stops dead in his tracks to snag a blade of grass and munch on it for whole city blocks.

*The body of a gladiator, you’d never know he’s kind of a nervous fellow. Still, he’s the envy of all the boy dogs I know (including me!)

*A very well-behaved dog on a leash unless his sister sees a cat then he goes into Protection Gladiator and rises up on his hind legs like, well, like a Boxer (I mean, like a human boxer – dukes at the ready!)

*Short-coated, golden like a chicken nugget, with a black, black nose and muzzle and don’t forget about those worried wrinkles etched in his forehead.

*Lost, sometimes, in his own worry, but an amazingly fun-loving guy and goofy as all-get-out if you give him half a chance. 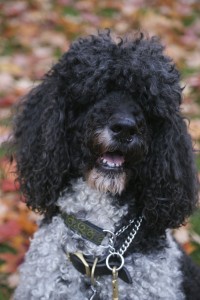 *Lives to smell other dog’s heads (yeah, I know, I should be writing “butts” but trust me, this guy has a thing for other dogs and their heads)

*Has a special fondness for anything he finds in my bowl and is not the least bit particular though some foods disagree with him (remember his nickname is Stinky!)

*When recently coiffed, he looks like a show poodle, but that doesn’t last long since he has a fondness for mud puddles. Cutest when he looks like a Muppet and is wearing his pooka shells!

*Has never learned to walk a straight line on a leash. He’d make a great swing dancer since he’s always circling around and spinning in great arcs.

*His black and white spots throw people off. “What kind of dog is that?” they ask and we respond – “He’s not a dog, he’s a curly-coated Holstein Cow!”

*Never lost — he just sometimes looks like he is.

You nailed that one, Rubin. That’s Monty down to the last curl!

Thanks. This is kind of fun! 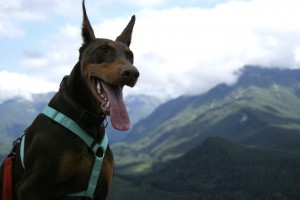 *Last seen tearing through the woods on a cold, dark night sniffing out the scent of something very interesting and low to the ground!

*Has a special fondness for Chicken Jerky, a Honey Crisp apple, and Gretchen’s socks (ew!)

*Sleek, svelte, and without an ounce of fat on her. A beauty!

*Has ears that are more expressive than Marcel Marceau’s face…heck, more than his whole body!

*Never lost – she knows exactly where she is and what she’s doing — it’s everyone else who’s confused.

(Who we miss very much — she’s still working on healing that broken toe!) 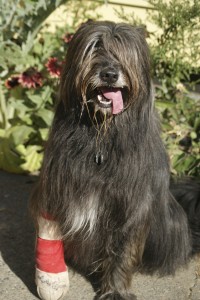 *Lives to make everyone happy!

*Is very particular about her treats though will do anything to be rubbed on her belly!

*Distant relative of Cousin It only not creepy in the least!

*Loves diving into the lake and letting her long locks float like seaweed all around her.

*Long, beautiful black and gray hair that flows like a cape and catches the breeze

*Lost? Not in her vocabulary. When you’re with Woobie, you’re found.

Are you a bit smitten with Woobie, Rubin? 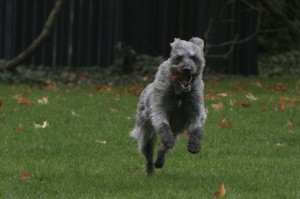 *Last seen (and mostly heard) with her tongue out and a wild look in her eye hoping we come by for a walk and a visit.

*Plays without rules, with free abandon like there’s no tomorrow!

*Has been known to dream of licking peanut butter out of the jar instead of just her Kong toy.

*Thunder thighs! Seriously. If she were any taller, you’d swear she was a horse!

*Loves racing around like crazy and then refusing to walk home because she’s too tired.

*Wolfhound is in there for sure, but the other mix (or mixes) are a mystery. She’s a Wolfdle!

*Not lost, just momentarily uncertain of where she is and where she should go next.

Wow Rubin, that was amazing.

Ya think? I mean, I know we haven’t seen Woobie or Roux this week, but I threw them in there because I kind of miss them.

I think they would be honored to be included. But remember, you saw Gemma too!

Oh yeah! She came by for a visit! I know we don’t walk her anymore, but can I make a poster for her?

Of course you can — it’s your blog after all!

Oh and you have photos still…I saw them when you were trying to clean out the photo album. Can I use one!

*Responds to the name Gemma, Gemster, GEMMA!!!!, and Gem 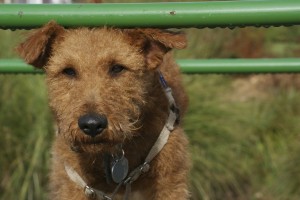 *Last seen turning her butt into any dog who looks like s/he would want to play (which was me the other night!)

*Believes every rule ever written was to be broken…by her!

*Flips out over ears. Yep, you heard me right. She loves to chomp on ears — mine in particular!

*I’m not saying she’s chunky, but she sure knows how to throw her weight around.

*Loves barking at dogs behind fences — it’s safer than barking at them face to face.

*Is Irish red and like anyone who knows redheads, she’s got a feisty, fiery dog-a-nality to match (but I love her!)

*Lost? You couldn’t lose her even if you tried (though I’d never!) – she’s everywhere at once!

Whew, that made me tired. I think my paws may never recover.

Good job, Rubes! Why don’t you call it a week.

Sounds like a plan! Have a great weekend everyone!

Wait! You need to write one for yourself.

I can’t write my own…you have to write it! 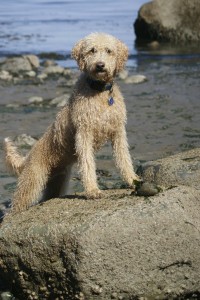 *Last seen chasing a squirrel up a tree

*Has a play drive as strong as his prey drive.

*Has recently acquired an appetite and has learned that all good things come from human pockets.

*Looks big and burly but is fine-boned and delicate (but don’t let anyone know!)

*Loves being off-leash especially if near water or his friends

*Since he has hair he can either look like a curly Muppet (see Monty) or a Meerkat if he’s been to the groomer. He prefers the Muppet look, except when it’s time to get combed out.

*Lost is a state of mind and that’s not a state he wants to visit (yes, he’s a Momma’s Boy)…

You said I could write it.

Give me back that keyboard.

Have a great weekend everybo…