The Trouble With Down/Stay 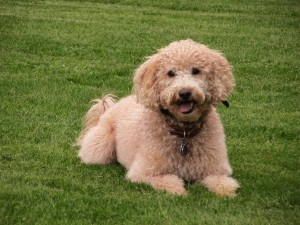 It’s an interesting question most humans never ponder. What is the purpose of a Down/Stay?  Oh, they (as in humans) may tell you that it keeps you safe, prevents you from running in front of a bus or chasing after child or getting yourself into the kind of trouble you can never imagine, but I say it’s conspiracy to keep us from having too much fun.

Take today for instance. Today we were to walk Lucy and Ollie only Lucy was unavailable so we ended up just walking Ollie.  We walked down through the wooded park, along the lake, up through the tunnel and then landed at the little field where Gretchen had me practice my down/stays.

I get that she thinks it’s important. I get that, in the past, I haven’t shown the best restraint or manners, but I’m over 2 years old now and you’d think…YOU’D THINK…she’d understand that I’m not going anywhere…well, anywhere for long.

But she doesn’t think that and so we practice down/stays with regularity and oh am I an obedient boy. You may think this is not really a challenge, but let’s just realize that, instead of being in a down/stay, I could be doing this… 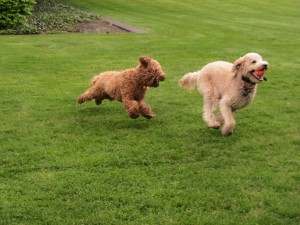 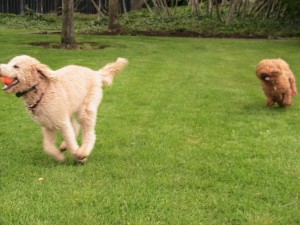 Ollie, he doesn’t get down/stay. Well, he might at home, but when he’s with us the commands “down” and “stay” are signals for him to sit and then inch his way closer to Gretchen because he thinks she’s got treats (which inevitably she does, but you get my point.).  For Ollie, everything is about the world outside himself. He reacts to life with an abandon I envy. 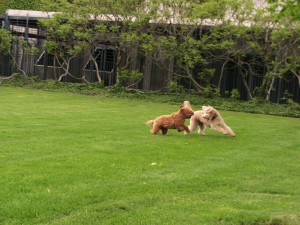 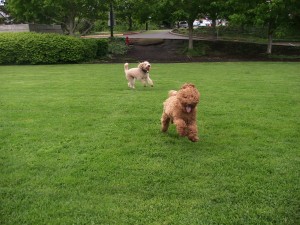 I can run by him and in no time flat, engage him in a glorious game of chase. Once lost in that game of chase, he loses all sense of himself and just flies around the field with a kind of spontaneity most humans pay good money to “practice” in therapy. 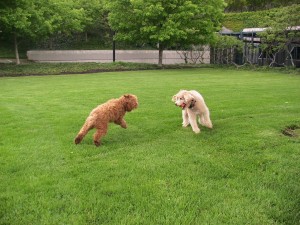 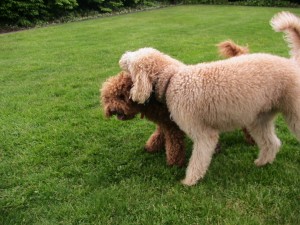 I must admit, his frivolity rubs off on me so when asked to perform a down/stay, it’s really hard not to just do this… 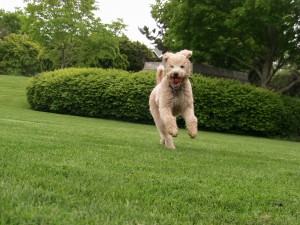 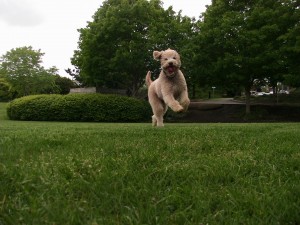 I suppose if I was a bit more solid on my “come” command, Gretchen wouldn’t be so persistent on the down/stay.  Ollie, though cute, cuddly, and 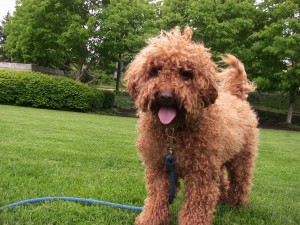 precocious isn’t the best performer when given a command, he usually comes to Gretchen when she calls.  I, on the other hand, am not as consistent, but that’s out of an intellectual choice to question authority and not out of some dark desire to be a bad dog.

Well, sometimes it’s fun to be a bad boy, but mostly I am not. Neither is Ollie. In fact, Ollie is downright exceptional all the time and well, that makes me look not so good on some occasions.

Still, though I had a number of down/stay lessons today, the majority of our time together was doing the thing I love most…playing with abandon.

Sure glad Ollie is there to help me keep up my playing with abandon skills!