I think I saw something I haven’t seen for awhile — my shadow!  Yep, that was it and it made me wanna roll in the grass for hours and hours! 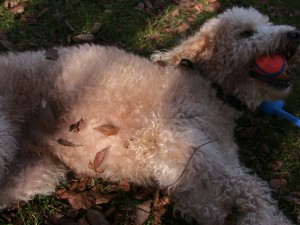 This is me at the park. Oshi and Perrito came with us and I played fetch (they’re not very good at it though they like to watch) while they smelled everything and peed on it for good measure!  When I got tired of chasing the ball, I laid down and rolled in the shadowy light of the trees on this pretty warm and sunny day. It was glorious. There’s nothing like a dog with his favorite orange and blue ball rolling around after a rousing game of fetch!

Perrito found it interesting to watch… 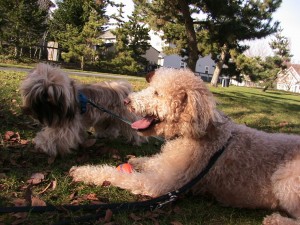 …but notice the shadows and the bright light and how I have a huge smile on my face because it’s sunny and relatively warm. Sure, I like the snow and the cold and I don’t even mind the rain, but sunshine…well, that’s something altogether special and we had it in spades today! 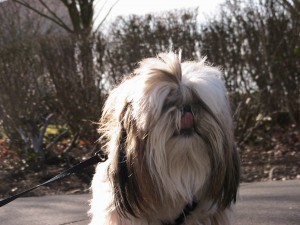 Even Oshi thought it was a lip-smackin’ good day, though he didn’t really want to hang out at the park as long as we did. He’s always looking back toward home.

Perrito, on the other hand, had his head down smelling the world and just like a Swiffer, he picked up everything…can you see the leaf on his chin? 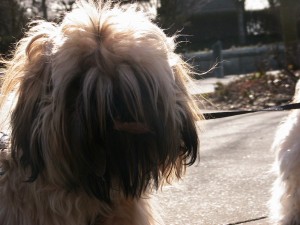 We hung out longer than we probably should have, but no one seemed to mind, least of all me!

The rest of the day was pretty easy. I got some “alone time” with Gretchen and we went for a long walk through Frink Park and along the lake.  We met up with Gemma and one of her dads on our way home and we got a chance to romp and wrestle before we headed home.

So it was a surprise that later in the afternoon, actually right around dinner time, we went to Gemma’s house and retrieved her!  She came to our house and we played some more in the backyard and then posed for some photos in the kitchen.  It didn’t work to take photos in the backyard as it was very dark out, but in the kitchen we ran into the problem of Gemma not liking the flash. No, honey, OPEN your eyes! 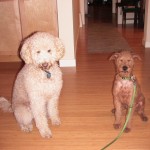 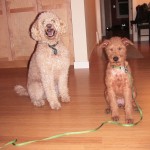 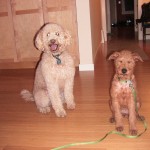 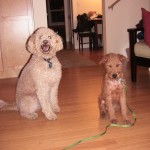 Once the photo shoot was over, Gemma went searching for my dinner, which used to be in my food stand, but was picked up before Gemma got there.  She’s got quite a nose on her! 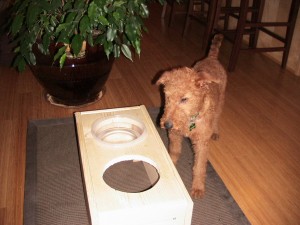 And still she closes her eyes!